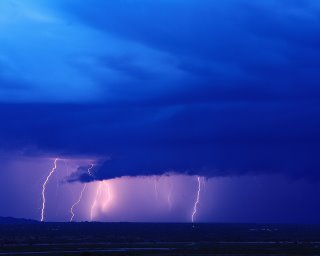 A year ago today, my Dad died... taking his final journey alone, as we all do. Within hours of his death, however, I felt him with me. And as today wore on, once again I felt him close by.

In Thoughts On My Dad,
I write about my relationship with him.

On this day, the anniversary of his death, a Storm is raging. It seems fitting, somehow, that the extreme weather seems to punctuate the vast difference in my life from a year ago.

I am writing this by hand, as I sit in Dad's chair by the fire. The power keeps going off, and I hesitate to use the computer during Wind and Rain's vicious assault. I have a lovely, aromatic Beeswax Candle lit, and it flickers a little as the flame catches a draft.

I feel a little like a Writer from the past, with my Book and Pen and Candlelight.

This morning, just as I awoke, Lightning pierced the darkened sky. I closed my eyes, in immediate self defense, but not before the Light pierced deep into my brain. The Lightning before and behind my eyes became a rhythmic orb, vibrating within me even with closed eyes. And then came the long, low rumbling of Thunder...at first sounding as if he had just woken in a grumbly mood...and then taking on strength until he totally enveloped the world with his roar.

The house shook! The dogs whimpered and barked, scurrying for cover, beside themselves with fear. Graham and I were no longer sleepy. And the thought raced through my mind that Thunder sounded a great deal like my Dad, at times. Was Dad perhaps sending me a Good Morning?

The power is off now, seemingly for good, this time. It has flickered on and off, with loud bangs in the distance, for awhile now. I hear the familiar whine of the fire trucks, ambulances and police as they race through the Storm. 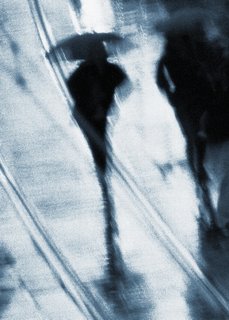 f Wind's power is becoming frightening, even to me, who revels in very strong, shrieking Wind. Trees whip back and forth high in the air, almost doubling over before the fury of the Storm. Wind drives sheets of water through the air, picking up moisture even from the saturated Earth.

My Dad and I once watched a Hurricane from the living room window of the home where I grew up. The Storm exhilarated him; I remember how happy and open he seemed with me that day. We shared that stimulating, thrilling joy at the power of Wind. This special memory is important to me; there were all too few of them, it seemed.

The power has been off for hours now. Our covered Glider-Lounge, Patio Tables and Chairs and various potted plants took flight, as I watched in astonishment from the kitchen window. Held in the arms of Wind, they were gently laid to rest about fifty feet from where their place is. Even the glass from the Patio Table sailed through the air, landing softly, intact, on the concrete sidewalk. I feel I am being guided through this long assault from the Storm.

Telephone lines are down. I have placed candles on many surfaces...the table, counters and shelves. I hear the house creak, reeling from another punishing gust of Wind. I fear for Grandfather Tree; he has been hit by Lightning twice, over the course of the years...will his strength hold through this onslaught?

A year ago, my father died, unleashing a storm of change, in all of his family's lives. It seems fitting to have a wild Storm on the anniversary of his death.

The Wind and Rain have not abated. I am hearing stories from neighbours that the highway going into Port Alberni, where Mom lives, has been closed. I am hearing stories about flooding...3rd Avenue, the main "drag", is flooded, with cars and logs floating in the rushing 'river'. Many main roads are closed, due to horrendous flooding. The people have been assaulted by Hail, Snow, Wind and much Rain, as have we. I know there is no power there.

I last spoke with Mom early this morning, before phone lines were cut off. She had been without power for a couple of hours at this point...it is now pointing towards late afternoon. And it is now that I cry for my Dad...I yearn for his bull-headed strength. 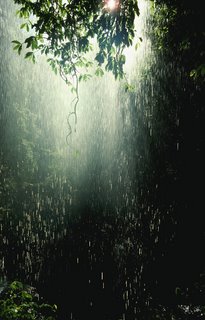 My mother's chair is electric...and the chair was left in an upright condition. A belief she has that one can, under no circumstances, move to a bed during the daytime, left her sitting in that position. With no TV, her daytime companion. Another belief that one does not read during the day leaves her with very few options. Mom is clinging to her routine, I know she is, even if I can't reach her. It is her security blanket.

Perhaps my Dad was bull-headed for a reason.

I cry, too, for the restrictions that have appeared in my life, with the responsibilities I have taken on with my Mom. It has enriched my life in so many ways; but it is hard. And tiring.

Sometimes, I become overwhelmed. In this moment, I want my Dad back, just so that he could shoulder these responsibilities once more...

But the light returns...Wind is abating somewhat. I have cleared the drains at the road; our house was almost flooded, at one point. A watery Sun peeks out for just a moment...a return of Strength and Hope.

I laugh at myself...are there not so many gifts I have been given, as I seek to form a relationship with my mother and therefore, myself? These are far more numerous than the tiredness and the restrictions on my time. A little give and take...