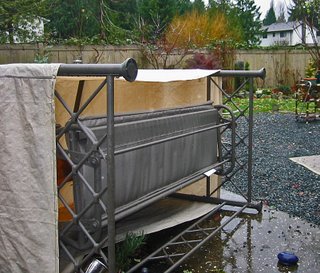 The west coast of Canada is still being pounded by Storm after Storm. These pictures were taken on the anniversary of Dad's death; there have been three storms since then, with another in the forecast for Tuesday.

We have a River running through our property now, from the empty lot next door, which requires some drainage work on the part of the absentee owners.

The dogs were hesitant to go outside with me to assess the damage to our outdoor furniture. Their eyes were as big as a child's eyes when she first sees a Christmas Tree, and blasts from Wind made them stumble. But dogs will face many terrible things in the name of protecting their loved ones...so they stayed by my side.

It was an astounding sight to see this big piece of furniture lifted high in the air, riding the strong Wind stream. The glass from the table sailed off, and landed gently, as if a giant hand held it safe, softly depositing it on the concrete sidewalk.

We have been lucky. Many, many large Trees fell...and many more will fall. Development and logging practices leave a screen of Trees around the perimeter...and these Trees do not have the strength, with no more protection from the grove of Trees they were once a part of, to withstand the force of Wind.

This was not a benign, moderate Storm. High, hurricane force Winds pummeled the land and its occupants and there was so much Water! And we hear on the news...there will be more, with the same face of the Storms that have just passed through.

With so much Water flowing, rushing everywhere...being spit over the Land by Wind, gushing Water...it was as if Earth received a cleansing. Detritus lies everywhere. All the bits and pieces of life and its beings are littered over every street and garden. Mostly useless bits. But Water washed the streets clean, with its great, Wind-driven force...the long, dusty 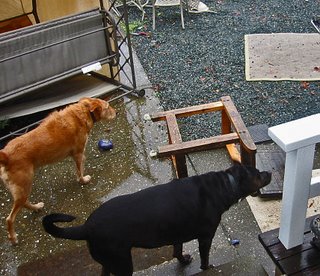 The Storm, wearing a vicious, twisted face, seemed to delight in his extreme ownership of the power of Wind. I felt a few twinges of fear, until I went outside to look at the damage caused by, what seemed to me, misuse of power.

It seemed the force of the Storm grew larger, as I stood, looking at the mess, feeling anger in my heart for the unfairness of it all. I had asked for guidance, earlier, when Storm first showed his face. And I had asked that all beings were kept safe. But if my garden was any indication, there was far worse damage being done all around me, by the punishing Storm. Hence my disappointment, and yes, momentary anger with my guides and allies.

And then I heard shrieking laughter from this Trickster of a Storm. I was feeding this Storm...I was sending black negativity directly to this amorphous being. I caught myself in an instant. I heard a gentle whisper, then...there is no damage, if you will only look first...and react later.

I heard myself laughing, even as I thanked my guides for another reminder. I stood in the face of this immense being, who was tweaking my serenity...and I smiled. I looked at Grandfather Tree, who had prepared himself long ago for errant Storms, with his broad base and sparse, upper body. He smiled, too...even as a few more distinctly angry gusts of this Storm's powerful breath tossed his limbs.

We spent the day yesterday, in the company of Wind, which has never left us. He is himself once more, powerful but contained. We raked leaves and cleaned up...and there truly is no damage, except to a few pot shards here and there. The glass top s 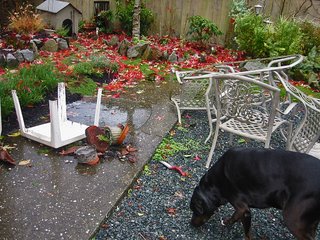 And I hear a whispered warning... there will be more Storms, just ahead. Indeed, the weather forecast gives credence to the warning... another large, rather ugly Storm will be here tomorrow.

I felt protected throughout these Storms just passed, with the exception of the one moment of disappointment...and I expect I will weather the other Storms that come in the same manner.

And I will remember the lesson, learned in the face of the Storm.
Posted by Marion at 4:19 p.m.