Last night, in my 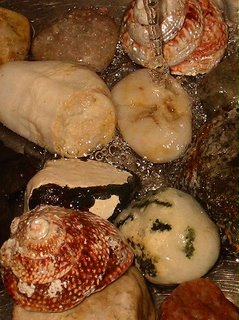 dreams, I wandered by Rivers and Streams, watching...always watching...the flow of water that tumbled along beside me.

Sometimes the way was rocky...Nurse Logs and Boulders impeded my way. But on the whole the journey was pleasant...it was not the path which was difficult. It was Water cascading along beside me that was reminding me to let go...

According to Maljonic's Dreams website, water in dreams has many meanings, according to who the dreamer is. Water manifests in so many ways...soft, gentle Mists gives way to hard, driving Rain, or a gentle, meandering Stream turns into a swollen, muddy, raging River.

But Water in dreams is always a heads-up about something important...a message I need to hear.

As I wandered along, listening to the birds sing, I caught sight of Bear...just out of the corner of my eye. I was immediately comforted. Grandfather Bear has been with me forever, throughout all the trials and joys.

It seemed a meaningless journey, with the exception of the great peace and acceptance I felt. It was wondrous with scenic beauty, the path on which I meandered along...but what was I to hear...what was the message?

The gentle Stream turned into a slow, lumbering River, which quickly grew huge Boulders, impeding the rush of Water, which shouted out her rage at being thwarted on her path. Water grew to gigantic proportions; she rushed and slammed her way through the thicket of Boulders, who stood fast and firm.

I shouted along with Water, as she battled for supremacy, chuckling at her freedom of emotional display against Boulders who had withstood her tantrums for a long time. 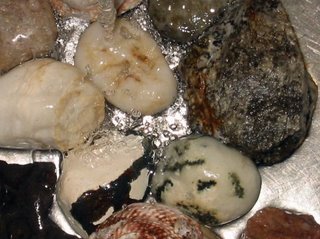 And finally, River calmed, the implacable Boulders became flat Stones that seemingly flowed along with the wide, wide body of Water that seemed spent, flowing at peace once again.

I heard the roar long before I saw the wide ribbon of Water that fell many feet. Filled with curiosity, I came closer to the edge of the Cliff, and saw a huge expanse of blue, blue Water. I knew it was Ocean who lay below waiting to receive River's offering.

I jumped over the edge, still feeling absolutely sure this was the right thing to do. Normally I am afraid of heights...my tummy does flip-flops when I find myself higher than a foot or two. But there was no fear in my dream.

I felt the warm, salty Ocean close over my head, and I floated in the soft briny blue of the sea, finally popping up to the surface, with such gladness in my heart.

I heard myself laughing and splashing in Ocean as I woke up, still feeling the warmth of Water surrounding me.

It was a cleansing and a re-birth. I felt the effects of the dream later in the morning when a huge wave of emotion came crashing over me, completely obliterating any thing in its way. The tears that followed were enorm 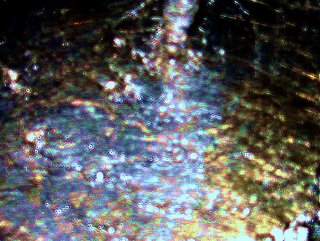 But they abated; leaving me with the joy and gladness and warm affection that I felt for my life in my dream. I released sorrow...of what kind it doesn't matter...

I listened to the message Water was sending, released the old obscure sorrows, let them go. I replaced them with gratefulness and acceptance and yes, peace.

And illumination.
Posted by Marion at 9:09 a.m.