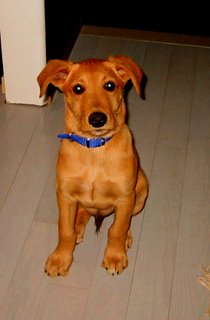 Two dogs have chosen to spend their lives with Graham and I. Both Lucky and Nate were SPCA puppies, when Lucky came into my life and Nate came to Graham's.

Lucky's story is interesting. His mother was a Golden Retriever and his dad was an Airedale. They lived side by side, separated only by a fence. Love blossomed in the Spring...even if the Retriever was a champion show dog, she loved that stubborn, insistent Airedale next door.

They were always kept apart...mainly because she had such proud lineage and her puppies were worth a fortune. But the Airedale was no slouch either...he was used for stud purposes; his seed was worth a fortune. And he definitely knew what he was doing when love was in the air.

All of the owners worked. Sometimes the dogs were left in their respective backyards; they were fully fenced and in good condition, with shrubbery around each perimeter. On a day when the soft breezes blew wispy seeds into the darkest corners of the yard (where they flourished and turned into monster weeds) and blew words of undying love into each dog's ear...they had had enough separation.

The Airedale dug and dug, with the Retriever helping from the other side. The fence structure went deep, and there was earth piled up as beds for the shrubbery. But the Airedale's forte was digging deep for his passions...be they rats or love. At the moment, he was digging for love, and nothing would any longer come between he and his lovely lady.

The meeting between the two of them can only be described as divinely orchestrated. After running and playing between the two yards, and inspecting each corner of the other's yard, with lots of marking being done by the Airedale, they had time to carefully inspect each other, whispering longing words of love. And the inevitable happened...the love words and dashing behaviour of her Airedale lover overcame her shyness...and she capitulated, as some women will.

The Airedale was crafty. He had dug his hole with careful concealment from prying eyes. And both dogs, tired out from a day of love, were in their respective yards when their owners came home. In this way, they were able to hide their liasons for a week. And the play, the love, the oneness between the two souls was truly a wondrous time.

But the weekend came. The jig was up. The owners filled the holes, and poured concrete. There would be no more visits.

But the Golden Retriever, whose menses were carefully timed in order to have a passion-filled weekend with a stud whose name was known far and wide, was pregnant. Hot words ensued between the owners...blaming words and angry tears...ahh, the unfairness of it all. Where were the dollars now that the Retriever was up the creek?

Whether it was the look in the Retriever's limpid eyes, or whether the owners just couldn't abort her Airedale tainted puppies, Lucky doesn't know...but he and twelve others were born on July 16...Graham's birthday.

And as soon as the owners could...in their case, they felt six weeks was long enough...they separated Lucky and his siblings from their mother ( who Lucky longingly describes as a loving, softly gentle tongue, which is all he can really remember. He claims he knows just what she looks like, but it's hardly likely. He can't remember yesterday).

Lucky and I met at the Adoption Room, run by the SPCA, at Petcetera in Nanaimo. He was very excited to see me, telling me his story over and over again, and telling me that he had had an operation almost as soon as he was born. Was he normal? he asked. He wouldn't leave my side.

My big, black lab Gus was nearing the end of his days. My neighbour at the time, Rodney (Wind), not wanting another loss in my life so soon after Lennix (my cat) had died, and so soon after my divorce, suggested I get a puppy. He said Gus had so much to teach...and he was right. Gus taught Lucky as a Shaman would. Gus would amble, doing his business, and Lucky would dance around him worrying his huge neck. Gus taught him all the things a dog should have learned from his mother...he became the substitute patriach. But the Lab didn't totally understand this presumed Lab/Airedale.

They told me Lucky was a Golden Labrador/Airedale cross. It was an easy mistake...he looked just like a Lab. But his siblings already had wispy Airedale/Retriever hair...and they must have known that Lucky was part of the same litter.

But I came in wanting a Labrador cross, and so Lucky became one, for a time. It was about six months before his long, feathery Retriever hair showed up, along with the coarse, wiry Airedale hair. I took him to a groomer. She shook her head, in absolute sorrow, and told me the characteristics of each breed...the dander the Airedale loses and the enormous amounts of hair the Retriever can shed. I was in for a dog's lifetime surrounded by tufts and billows of hair.

Gus and I had a very close relationship...we had spent many lonely, frightened nights together after the world around me crashed and change irrevocably. And I trusted that my old Shaman dog friend would teach this new whippersnapper exactly what he would need to know. I thought old Gussy would depart on his new journey in the early fall, but Lucky gave him a need to stay for awhile longer. When his job was done, he left us to our own devices, Lucky and I. But he stayed very close...he still has work to do with Lucky. 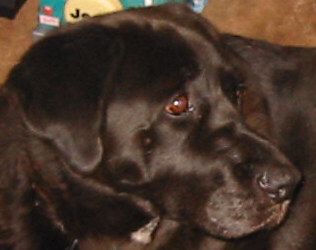 Nate only met Gus once; Gus, despite his advanced age and Nate's young one, immediately showed him who was boss, and Nate listened. Within that short meeting between the two dogs, enough information was passed that Gus knew Nate would be his Lab replacement, even if Nate looked more like a terrier at that point. And Gus knew there was more work to be done with Nate. But his old body husk was deteriorating quickly; Gus continues now to work with both dogs from the spirit world. 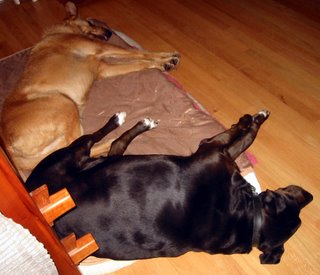 Nate was much bigger than Lucky when they met; but this would change over the next two years... Lucky, I think, hasn't stopped growing yet. Apparently, Airedales can take four or five years to grow up, listen and have some wisdom. Lucky has proven that this is the case. But as a puppy, in a strange place where he'd never been before, he found his way back to his new home, after someone dropped his leash. And he dashed off. And..and...and that's Lucky.

But he's got great potential...