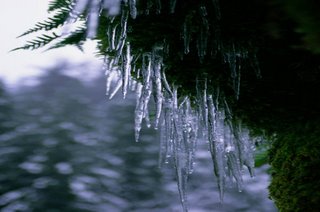 Weenie or not, I was completely deter- mined. The Reiki table seemed a mile high. I had time to wonder why I felt such apprehension before a Reiki treatment...I never have before.

Not able to lie on my back on the table, I had to lie on my side. It made seeking and speaking with my guides much easier...it seemed I was more aware, and more ready to work. I called on Michael, Gabriel, and Abundia...each guide appeared, showering me with their signature colours. I felt more relaxed, less afraid. I spoke to them about the dream, asking for clarification. Once again, I 'forgot' the children.

I visualized my spine, and the twisted muscles, ligaments and nerves. I showed my guides where the dark entity resided, at the pelvis and groin and knee and ankle, all dark and swollen. I asked for their help, as I faced whatever it was. Once my focus was completely centred with my guides on the injury, I also accepted there was no going back.

I received a vision from my guides...of babies. My forgotten babies. As the warm Reiki energy flowed through my body, I released all the born and unborn babies I might have had. I released any guilt, sadness and thoughts of might-have-beens. Dark, heavy tears stabbed my eyes, and I let them flow. There was a fleeting moment of surprise, before I went with the river of energy flowing through my body. This was old baggage...it happened, and was over...and then I stored the luggage, never, ever to open it again.

I was given another vision...one of my leg and hip bones shifting ever so softly back into place. It was featherlight, and if I had not been given the vision, I would not have realized what had taken place. There was an immediate release of pain, but the tears wouldn't stop. I cried for a long time, saying hello and goodbye to the miscarriages and the stillbirths and the child who lived until she was 23. There were all these pieces still left, you see...all these pieces that had been stuffed into containers and boxes. 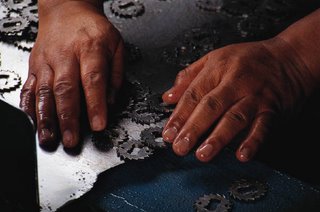 And that's what Lennix tried to show me. The night after the dream about Lennix, I had another dream in which a Tupperware container figured prominently...throughout the whole dream, I carried that box with me. Lennix was never afraid...of dogs, containers and what they held, or anything else.That was the very special part of Lennix. And as I stared into his eyes, the lost children that were so familiar danced and laughed beside him, surrounded by some open and some closed boxes.

Lennix was telling me to open all the containers. He was telling me that I should stand and face my fear of old wounds. He was giving me the message those children were alright, had been for a long while. He showed me what courage could be, when he faced down those dogs. And he offered me independence and freedom from pain, should I be brave enough.

I had the vision of the bones knitting in place when I realized I had to face and let go of my unborn children, when I let the emotions I had carried in closed boxes so long free rein.

There were many other messages and signs during the period of a week, too many to go into detail here. There was the night I closed my eyes, just before sleep, and 'saw' a hip and leg far apart from each other, for example. It was just after my third massage treatment, when it seemed as if nothing would work, and again, I was asking my guides for assistance. At the time, I didn't know what I was being shown.

That was the way it was throughout...one day, I would be shown something relevant, or the next night, I would have a dream. It was up to me to piece everything together, to use all the knowledge I had learned. I am very lucky Graham is a Karuna Reiki Master; his quiet ability to move huge amounts of energy through my body is quite awesome. After healing so many people, we wondered why Reiki was not healing me...but then I wasn't ready to do everything I could to heal myself. It took a tremendous amount of unrelenting pain for me to face fear of this magnitude.