Lucky, Nate and Visitors from Beyond 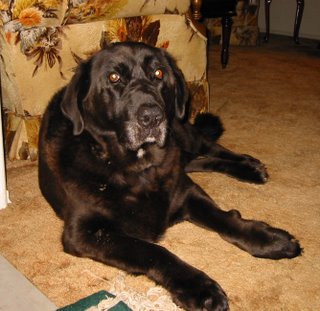 When Gussy left us for his new journey, his body husk became sore, fatigued and wasted. He could no longer walk down stairs, eating became a chore, and although there was still a lot of wisdom and love in his eyes, his time had come.

Lucky mourned Gussy...we slept curled up together the first night, and Lucky was very restless. I got up at 2 AM. I had heard Gussy's padding step, his nails clicking on the hardwood floor. (He was always afraid of that floor...it was slippery and he was not too steady in his latter years.)

We sat and talked, Gus and I, into the night...and Lucky sat by my feet. Taking it all in. It was his first introduction to the 'visitors' from beyond that came by with regularity. Gus, of course, the old Shaman that he was, knew well how to appear on another plane...the veils were very thin to Gus.

He told me he felt he would stay awhile with Lucky and I...there were changes coming, and he wanted to help ease the way. He reassured me...it was much easier to maneuver now, he said, his body, having shed various layers, was completely healed...and he thanked me. He imprinted his energy signature on both myself and Lucky, who sat quietly, shaking with excitement and nerves. And he told me he would shapeshift. He would use the Raven most often, he said, but there would be times when he would arrive in whatever shape he happened to be in.

Hence, the energy signature imprint. One that Lucky... and over time, Nate, too...recognizes instantly, as do I.

When I moved to Qualicum Beach, Gussy went with Lucky and I. Lucky and Nate were very close...instantly recognizing each other and bonding tightly. But they were two very young dogs who egged each other on. Nate became very protective of Lucky, who took every little thing and blew it up all out of proportion, becoming hyper-excited. And Nate threw himself at doors, barking wildly, whenever someone appeared. The very atmosphere was electrified, vibrating with energy...we were all in a new house, in a new life.

Gus became the balancing factor...in one case, when someone came to the door and Nate went into his routine...something grabbed him and threw him away from the door. Nate whined, his tail between his legs, and came to me looking very chastened. His behavior altered after that incident, although he still has some work to do. But Gus assures me, with maturity, Nate will get it, and indeed he is. 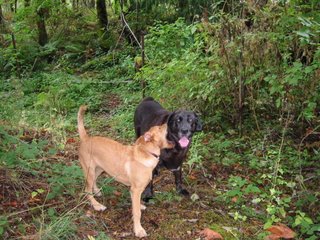 And there is the Raven, that Lucky actually sits and talks with. There is such excitement and pleasure in Lucky's bark when he sees the Raven, who will sit in a tree and call to Lucky, in different tones than any I've heard from Raven. And then, Lucky stops barking (in itself, a great feat) and listens, tail wagging madly.

During my meditations under Grandfather Tree (Awareness)Lucky and Nate stay close by my side. If I am standing, Lucky will sense beings with me, and becomes very aware and alert. Nate, now, has accepted the 'visitors' that sometimes appear, but is still wary. He watches. The stillness in both dogs during these events is a great learning lesson for me on dogs and the paranormal.

Nate knows when a member of his family is close, especially Scott. Many times, Nate will grow very alert moments before Scott arrives. And Lucky knows when Bree comes to visit, at least 24 hours before she appears. The dogs hone their extra senses constantly and the results show.

But then, they've been taught by Shaman Gus himself...
Posted by Marion at 1:38 p.m.