Where Do the Years Go? 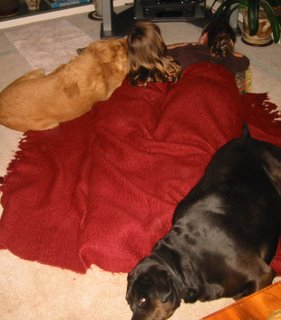 The girls, Bree and Ash, have gone home again, leaving a little hollow space behind. We had a good, long visit this time...a lot of quality time spent together. There was still a rush on the girls' part to do everything there was to do in the first fifteen minutes of being here. But the visit, once it sunk in that they didn't have to go home the next day, became more relaxed as a result of the longer time period.

There was lots to do. On the first day, we wandered to the Coombs Country Market where we had lunch, after which I gave the girls a little pocket money. Off they went, while I shopped for fresh vegetables and exotic ingredients (a little black truffle- infused olive oil, anyone?). I couldn't resist the strawberry shortcakes, or the apple cinnamon buns, either...

The two girls carried in my groceries! Even with my leg and hip healing well now, there is still residual pain that will take time to go away, and by this point I was definitely feeling a bit of it. Having help was greatly appreciated. I hardly saw them the rest of the day...they were on the trampoline, walking the dogs, going to the park. We watched the new Harry Potter movie that evening. This was another reminder that time does not stand still...Harry and Hermione and Ron etc. have all grown during the span of the Harry Potter movies. As Bree remarked...it's kinda weird watching someone grow up who you don't even know.

The next day I suggested we visit the World Parrot Refuge in Coombs. What a miraculous place. My heart was given to a relatively small bird, her feathers flushed with pink, who flew directly to us and whispered, "Hello..." in a small, hushed tone. Her eyes were dark and intelligent. We spoke directly and intuitively to each other. We were warned before we went into the enclosure not to stick our fingers near the birds, no matter how inviting they appeared, because some of them will bite...right to the bone.

But I wanted to take this little pink bird and hold her close to my heart and shelter her...it brings tears to my eyes just remembering the connection between us. Her story was not a good one...and she spoke for all the birds, all rescued for one reason or another. The primary reason, of course, being abuse by humans.

These parrots live a long life, possibly surpassing my life span. They are likened to "caring for a special needs child", which takes a huge amount of dedication and love. People forgot, the pink messenger told me, that parrots need love, when they decided to own one. If you have a deep, abiding love for something, you care for it, recognizing its needs...and meeting them.

I promised I would pass the message on.

The girls and I had long conversations that day about the parrot rescue operation...I didn't know until later that Bree had left a donation (she gave a toonie, she said, she wished she'd had fifty to place in the jar). They were both heartened by the fact the birds now lived in comfort.

In the afternoon, they visited the Indoor Pool for a couple of hours; went shopping through Qualicum's Town Centre, and arrived back home when they said they would! Then another dog walk, numerous trampoline excursions, dinner (where we had Bree's favorite...barbecued pork ribs, which Ash loved, too). The TV was turned on rarely...o 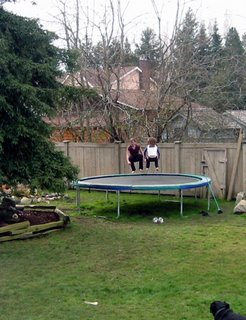 nly at bedtime for a bit, before sleep overcame them. By then, I was fast asleep...

And then...a bonus. Heidi and Darren, my daughter and son-in-law, were held up in traffic on the Malahat. I felt badly for them...the situation they found themselves in was a tragedy in itself, not to mention the inconvenience. But the kids and I found ourselves a couple more hours together, by not having to leave until late afternoon instead of lunchtime.

Bree left a note, on the made-up bed...a thank you note, enclosing the change she had left from the money I had given her, with loads of love and kisses and hugs. That card shot straight into my heart chakra, bringing brimming tear-filled eyes.

When grandkids go home, my eyes overflow for a while and tissue in hand, I reflect on the time spent together. This was a great visit...everything worked out wonderfully. The sense of independence the girls have learned was hugely beneficial...they now keep themselves totally occupied. Walking to the Town Centre, exploring the parks and paths that make up Qualicum Beach, looking forward to the summer when they can come here and walk to the beach or the pool...it brought a whole different perspective to this visit for them.

They both see a whole new world out there, and they're both ready to experience it to its fullest capacity. They're both on the edge of the teetering balance bar of puberty.