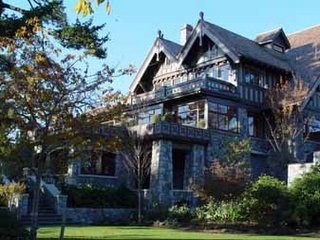 Earlier in the day, we had driven to The Rosemeade Dining Room in order to find it easily in the dark, as our reservation was not until 7:30. The gardens were a delight...even in the very early Spring, I could imagine the wonders that awaited warmer weather, unveiling their beauty all over the five acres The English Inn stands on.

Graham had researched this restaurant, and others, very carefully. He knows I love the freshest ingredients, love the use of local food, the use of organic over anything else. There are foods I haven't tried; he knew I would enjoy the opportunity to try something new. After much deliberation, he decided on Rosemeade, after hearing about the new chef on the radio.

Even after an afternoon of rest, it was still difficult to dress and walk to the car and into the restaurant. Due to a swollen foot and leg, I was unable to walk in anything resembling a pair of heels; therefore, my pants puddled around my slippered feet. I limped. But the anticipation of doing something so outside of my normal sphere made any self-consciousness disappear.

The Rosemeade had promised we would be treated royally; if the Queen who arrived looked a little under-the-weather, well...so be it. The staff took the whole thing in their stride.

We were seated by a window overlooking the gardens, which were lit up with strategic lighting placed here and there. Almost immediately, we were greeted by a server, who brought us menus. These were lovely long parchment-like sheets. And then another server asked if we wanted something to drink. These people all spoke in hushed tones...the atmosphere in the whole restaurant was subdued; no raucous behavior here.

Until we arrived, that is. Both Gray and I found it very hard to hear our server, who was offering us sparkling mineral water. In our total concentration on what she was describing to us, Gray's menu went up in flames from the candle centred on our table. We didn't even notice that it was burning until the server left! And then Graham, with this total look of bewilderment on his face, didn't know how to put it out...the table was covered with a pristine white cloth. Nothing came to mind. So he waved it around...it went out and as it did, it spread the most aromatic stench throughout the restaurant. This gourmet much-touted restaurant now smelled of burning plastic, instead of exotic food combinations.

I could feel totally unrestrained laughter bubbling up inside of me, and I prayed I wouldn't let go with one of the very loud guffaws I am known for. I wanted to laugh out loud very hard...but I was able to restrain myself to almost silent laughter. Giggles (and small snorts) escaped me as staff quietly and inconspicuously wandered our way, to make sure everything was under control.

But I couldn't stop laughing. Soon the staff regaled us with stories of people throwing their napkins down on the small candles on the tables, after finishing their dinner, and leaving as a bonfire started to burn merrily. We were told that the polyester in the napkins smelled much the same as the menu; even if they didn't know where the burning was taking place, they knew what it was. Other tables, too, joined in the laughter, and the mood lifted as the humour in the situation became apparent. Very quickly, however, their attention returned to the wonderful creations that were being placed before them.

We were given the burned menu as as souvenir.

Neither Graham nor I drink alcohol, so sometimes it can become irritating when alcoholic drinks become the focus of some restaurants. How wonderful to have Voss Water offered instead. I had never tasted it, although I had read about it. It comes from Norway's artesian wells; it is beyond good...the water lent a lively, fresh note to the many different ingredients we were served. We drank two big bottles of it during our meal. It is only available in Canada through the Internet, we were told.

We were offered an amuse-bouches before our meal...a little bite of seared tuna, beautifully rare in the centre, served in a tasting spoon with a bit of the braising sauce. We were told the chef has a different amuse-bouche ( a little bite that delights) every Friday and Saturday, and nobody knows what it will be. How creative this would be, I thought, to find an ingredient so fresh and perfect that it could be featured as the first taste the diner takes...the first hint of things to come.

It was hard to decide, but we made up our minds as to what to have after long discussions between the two of us. For appetizers, Gray had the oyster selection in blood orange gratin, and I had (directly copied from the burned menu) warm shelled mussels tossed with creme fraiche and anchovy dressing, gherkins and dill over herbed french toast. 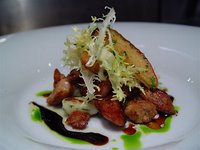 For the main, Gray chose albacore tuna, truffled squash salad, olive tapenade, shallots and reduced braising liquid. I had poached beef tenderloin, roquefort whipped potato, with an oxtail and 5 onion broth, and pickled beet salad. Beautifully presented and cooked to perfection, these works of art were created by someone who knows his ingredients and the qualities of each very well.

We were certainly well satiated; however, the dessert menu arrived, and it was my birthday...I couldn't resist the cheese plate and the warm molten chocolate cake was calling Graham's name. We shared a taste of each other's...there were Saltspring Island Goat Cheese, Ontario Cheddar, and blue cheese...I think it was from the US. Gray's chocolate cake was wonderfully runny, just as molten lava might be. It was all so good!

At no time were we ever rushed...a server just melted out of the woodwork and did his work quietly and very efficiently...never hovering, just very aware.

Gray tried to find our own coats, because I had difficulty in standing after sitting so long, and for a long moment there was no one about; they were there quickly when Gray opened the closet door where the coats were held.

We walked through the gardens, all lit up with white lights, not wanting the magical evening to end. It was very cold; the old houses that are part of this resort lent their grace to what seemed a scene out of Lord of the Rings. I imagined Gandalf riding down the lanes, in pursuit of someone or something. The English Inn would be an incredible place to go for visualizations and meditations...there is so much inspiration here.

It was late. We rehashed the evening, laughed a lot at ourselves and our impressions of the evening, and fell asleep, greatly satisfied. What a terrific birthday celebration!
Posted by Marion at 8:52 a.m.