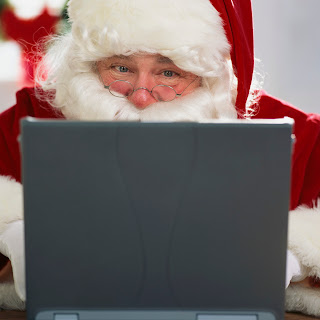 Santa must be outrageously busy at this time of year. I wonder, sometimes, if he gets over- whelmed and crabby, but I know he has learned much wisdom over the Centuries.  He must balance and centre himself a whole lot.


I think he must know by now, after years and years of handing out toys to all the kids out there, that once he has finished, he has time for a rest.


And that another whole year will pass before he has to check that toy list again...twice.


I've recently been told by my Spy Elf that his Techie Elves all got together and gave him a laptop computer. If he could only figure out this strange gift, he has the tools to be very organized, right there on his lap! I imagine he would have files in his computer with every child's name on it. With every year categorized. But I've heard that he can become quite exasperated with his newest tool.


I imagine that a few of his Techie Elves are quite sensitive, and would help Santa when the computer just becomes too difficult. I imagine the Elves would, after Santa's worked on it for awhile, urge him to find a cup of herbal tea and cookies. 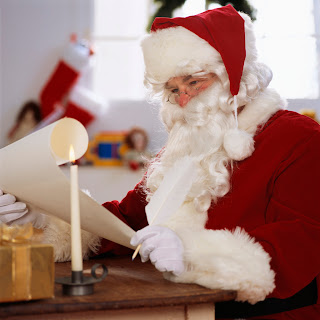 And then I know the Elves fix Santa's computer so that all the boys and girls, whose files have been all mixed up by Santa, will all be back in place, easily found. It took the Elves a very long time to convince Santa that the computer was the way to go, in this day and age, rather than that long list he carried around.


Santa's not so sure, though, that hard copy list never changed, was always easily read. He never had to worry about deleting the list, as sometimes happens with the computer. He never had to worry about the anxiety that suddenly appeared...computer anxiety. He has the best Elf technicians anybody could ask for...and if it gets too tough, computer wise, he just hands it over to them.


He really doesn't have time to argue with those Elves these days, anyway. They want him to take his laptop in his sleigh, when he goes to deliver those toys to all the boys and girls who have waited a whole year. But, in his wisdom, he knows this might not be a good thing...to rely on that computer. It is not easy to contact online computer technicians, who have always promised help but rarely follow through, over Christmas. And he accepts his limitations...he can read a written list, but how does he find those lost files, once they seemingly disappear? No matter which button he pushes. Or clicks, he forgets the new terminology sometimes.


So Santa always takes his written list, along with his laptop. It is just too wearing to argue with those Elf technicians, so 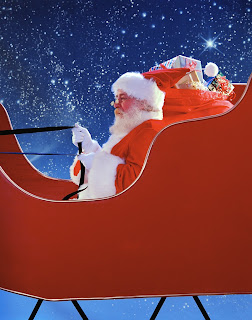 he pretends that he can't wait to take his laptop with him. But he hides his list in his back pocket, not even telling Mrs. Claus that he prefers the written list. She's so much better on the computer than he is, he doesn't want her to know that he prefers his list.


But as soon as he is out of sight of the North Pole, he tosses the laptop into the back of the sleigh, squares his shoulders and takes a deep breath. He takes his folded list out of his back pocket, and checks the first name. He is back in control.


After checking each name (twice!), directing his reindeer, climbing on slippery roofs, getting stuck in tight chimneys, drinking gallons of milk and eating a million cookies, Santa gets tired.


Sometimes he wishes that the boys and girls would leave some hot Chicken Soup, and a cup of Herbal tea. All those cookies are great, but that sugar just doesn't sit well in his tummy anymore. However, he shrugs his shoulders, and reminds himself to be grateful. It would be a long night without those sugary snacks to keep him going.


Finally, the last name is checked (twice!) and the Reindeer, with round tummies from all the apples and oats left outside for them, turn wearily home.


Just before he sees the lights of his compound in the North Pole, he pulls his laptop from under the empty Toy Bag, and quickly tries to make it look as if he has used it the whole night. Ding! ...goes the computer...and up comes a blue screen. With nothing on it. Oh oh.


Santa tosses the computer back onto the back seat again, and congratulates himself on a job well done. He is thankful for his wisdom in taking that long list of written names.


As his Elves, unloading the sleigh, brush off cookie crumbs and spots of milk off the upholstery of the sleigh seats, they find the laptop.


How did Santa ever manage to deliver all the toys, when the computer was frozen solid, when it wouldn't even boot up? They shrug their shoulders, telling themselves they shouldn't be too surprised...Santa's done this trip a million times without a computer, and he's just done one more. Perhaps next year...


In the meantime, Santa has eaten the chicken Soup he 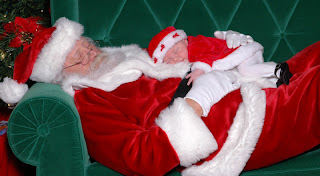 has dreamt about all night, has his cup of herbal tea, and finds the couch. Mrs. Claus places one of the Elf babies on his belly...and they're
off to dreamland.


Santa mumbles, just before sleep overtakes him, MERRY CHRISTMAS TO ALL...AND TO ALL A GOOD NIGHT!
Posted by Marion at 7:37 a.m.