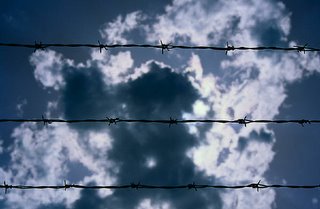 When I met Mary, this photo illustrates how I looked at the world...as a place where I could participate only if I first climbed through the barbed wire that encircled it. I was at that place where just living...drawing a breath, putting one foot in front of the other...took every last bit of strength I had. That place where any more changes would have torn me to shreds.

For a period of years, I would see Mary, my therapist, every month...sometimes every week. Her appointment card on my fridge dragged me through, gave me hope, until I could see her again. Her job and mine was to take the person I had become, and show me...make me understand...that I was really someone very different, underneath the jumble of other peoples' beliefs I had taken as mine.

It was a daunting task. There were times when revelations came so thickly and quickly, I had trouble keeping up. I would go to an appointment, and walk out of there having absolutely no remembrance of what we talked about. But Mary had a way of asking questions that would pop up, out of nowhere, during the course of the next few days.

She asked me one two days ago, by email, as we discussed my next appointment. And again, it surprised me and yes, Mary, I was surprised by their reaction! I am still mulling that over...I need her ability to cut to the chase and 'see' very clearly, without seeming to! By using that approach, Mary was able to draw out my confidences, listening hard, but looking as if we were discussing the weather...and then zap me with a comment or question. She had a way of sending me reeling, when I least expected it.

And that was how I started to learn who I really was, underneath all the bull. And to face it honestly, no longer trying so hard to fool myself. Knowing if I continued to fool myself, I was never going to survive.Living other people's visions of their hopes, dreams and realities could not sustain my soul, withering away as it was without any outlet for its own creativity.

Mary led me through some hard truths, taught me to look for the other faces in a given situation. She encouraged me, was concerned for me, was interested in me and what I could do.
She taught me to open myself again, to other people. And then to face the fear of my undesirability. She cheered me along...and I began to learn I wasn't crazy. 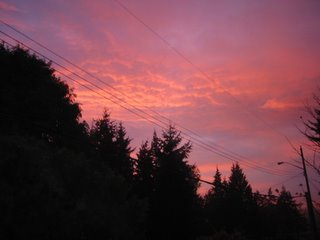 It was a long process...a lifetime of living for others made me deride any decision I had to make for myself. And it was like I was living in a long, dark tunnel. The light at the end of it only very gradually became apparent.

I took a jog in the path Mary and I were walking together and moved to another town. Appointments became fewer, not only because of the distance, but because I was suddenly healing on my own. I would save up situations over the times between appointments; then spill them all out when I saw her. I don't really remember the situations or the answers now; but it all contributed to the whole of my healing.

And she was and still is so interested in me. It was a first in my life...the feeling that I might be interesting. I just never thought about it before.

Her appointment card, once displayed so prominently on my fridge, is now a business card, one more amongst the hundred others tacked on the appliance. But my eye found it early on, and I know exactly where it is. And when the inevitable crisis or change happens, and I can't see the forest for the trees, I'll reach for that card knowing, without any doubt, Mary's far-seeing eyesight will immediately be able to pinpoint the nut of the whole thing.

But, at the moment, I am saying goodbye to the therapist and hello to a new relationship...one where I'll email her with news of what's new, just as I would any other friend. And that's what I hope Mary and I will become, as I walk into the unknown future...good friends.

A friendship with honesty and trust as the cornerstone.
Posted by Marion at 9:03 a.m.