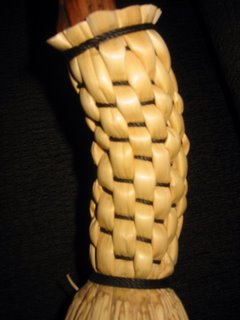 On a trip to Queen's Bay in the Kootenays a year and a half ago to visit good friends of Gray's, we took a side trip to Crawford Bay. Gray was very familiar with the area, having spent many holidays with John and Clo, and he knew how I loved brooms.

The North Woven Broom Company is a tiny log barn on the side of the Hwy. 3A in Crawford Bay. They are situated on Kootenay Lake, across from Nelson.

It was a cold, clear November day when we took the ferry across the lake to Crawford Bay. Not many leaves remained on the trees. Winter comes early to the Kootenays, and I was reminded of that as we walked into the log barn. There was no heat; and yet the broom weavers worked on, weaving the corn into the most amazing brooms I had ever seen.

And there were brooms everywhere! It was a broom lover's paradise. I bought a Shaker flat broom, an untrimmed natural branch broom (the one in the picture) and a turkey wing whisk. I think about the weaver of my broom each and every day, admiring her artistry and strength.

I use the Shaker broom for sweeping, be it bad energies or just plain dirt. The untrimmed natural branch broom is one of my tools I use for smudging and cleansing. When it's not in use, it sits against the fireplace in pride of place. 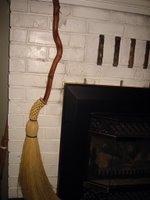 The owners weave Marriage brooms. These are brooms that use a forked branch as the handle, and couples, traditionally during a handfasting or other wedding celebrations, hold hands and jump over the broom, ensuring good luck for their union. To give a new broom as a gift is considered to bring good luck to the recipient. And couples stepping over a new broom on their home's threshold will also bring good luck, according to a Welsh custom.

The Shaker broom is two years old now. Very few of the broom corn stalks these brooms are made with have escaped the tight weave. It has been used at least twice a day in my home, and outside on the concrete. It works as well as it did the first time I used it.

We also picked up some beeswax candles made by The Kootenay Candle Company. We weren't lucky enough to go to their workshop, where visitors can watch the candles being dipped, but we were happy with the quality of the candles. I rarely burn any candle other than beeswax...it is the only fuel known to science that releases a negative ion as it burns. According to The Cheeky Bee Candle Company negative ions are proven to eliminate dust, pollen, mould, smoke and food odours, and pet dander, as well as airborne germs and bacteria.

As I can attest, having allergies and two dogs who live in this house, roaming with carefree abandon from room to room, the beeswax candles do work in combatting the worst of dog dander and bettering air quality in general. I could burn beeswax all day long, and not have a stuffy nose or runny eyes. And they leave behind the most wonderful honeylike aroma which puts me in mind of sunny summer mornings, eating toast with butter and honey for breakfast.

It was a great holiday...the Kootenays felt very spiritual to me. John and Clo live on the side of a mountain overlooking Kootenay Lake. Clo took us on a ramble up the mountain ( for this non-climber, it seemed like a very long ramble!) and there were many places where I just had to stop and listen to the whispers from the land.

The spirituality that is so apparent in this part of the province leads to alternative styles of living. It seemed to me that people here were very involved with listening to what the land, the trees and mountains, and the lake itself were saying. It is an area I would very much like to know better...I felt as if I had come home.

There are a few places I have visited that have that coming home feeling. The Columbia River Gorge is another. These places speak to my soul, with very ancient words of wisdom. And if I can name two places just like that, then I know there are many places in the world that will teach us, if we would only listen.

And, as a bonus and a gift, I found tools for living in the brooms and the candles, made with very spiritual hands, as a reward for listening to the whispers and stories that abound in these power places.
Posted by Marion at 3:54 p.m.