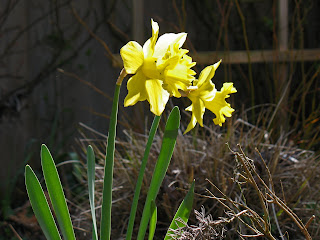 I look outside this morning, and there is nary a cloud to be seen. Sun's warm rays brighten Daffodils' shiny, eager faces even more, making them shiver with delight.

Red Tulips, sensuous in their silken cups, line the path, sending a siren's scent, lingering...overpowering at times, soft and gentle at others. They seem to preen themselves with Sun's rays even more than usual, this morning.

Sun chases the last vestiges of a soul-speaking dream I had last night; the message given has not been deciphered as yet... 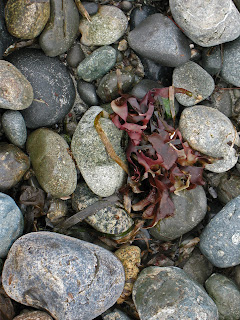 Sodden, it was...dripping and gurgling, sloshing and splashing...I was in a world of Water. I was not in my cumbersome physical body, I was only an eye, an eye that was ever aware of each nuance of the droplets of Rain and flowing streams that surrounded me.

Objects and Beings that came to me in my watery World shimmered silver at times and became gauzy grey at others, obscured by bubbling froth. My Soul's eye recognized these incandescent energy signatures, connecting with each as it passed through in a small whirlpool of wavering thought.

There was the Cat, sleekly gliding through heavy moisture, his eyes burning into my Soul, telling me to be aware, offering protection from deceit. Eagle, a frequent enough visitor in my daylight hours for me to nickname him Scree, glided by on a stream of Water, offering me the gift of farsightedness. He tells me his tales of prosperity and success...he tells me not to fear failure, for without failure there is no success.

An avalanche of Pebbles and Stones floated by, each turning and winking a bright light, each a warm bastion of strength in this uncertain watery place I found myself in. My spiritual guides for this journey had arrived. 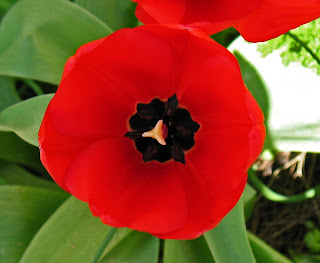 I became a slithering droplet of water, with the ability to adapt and become entirely mutable, independent of other's words and thoughts. I experienced the silky sensation of runneling down a Flower petal, gathering with other droplets in the heart of the Flower.

I became a Raindrop, freezing into a Snowflake. I joined other droplets, gathering in pools, small and large. I entered the Ocean, tasting the brine. I kissed the tops of Trees, before running down to invite their thirsty roots to drink.

I became a Tear, sliding down a downy baby cheek, or gathering in the deeply carved fissures of an elder's face. I 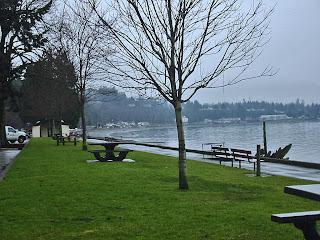 learned that different Tears for different Beings feel the same.

I tasted hard baked Sand and Dirt; I gave a small, insignificant flower, a survivor of neglect, a kiss to nourish its weak growth. I wanted to give it hope.

I fell through pollutants and tasted acid, making my soul curl and shrivel up in disgust, sadness and fear.

I merged with a dewdrop, I extinguished a burning forest, I slaked the thirst of a runner...

I opened my unconscious, closed energy and allowed it to flow freely, allowed it to be submerged and cleansed in the Water of Life.

But when I became aware, in my dream, that I was dreaming, I felt my body return, my guides leave, and I knew I would soon waken.

I am a Pisces; I dream of Water often. It is an entirely comfortable place for me to be. It is the first time I have experienced being a drop of Water, however. It is a difficult dream to describe...feelings and emotions were fleeting, hard to catch and hold. Always, Water in my dreams reflect my e 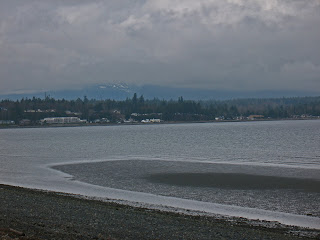 motional status... so what did an insig- nificant droplet of Water have to tell me?

A glimpse into another World, it seems.

I would awaken to the sound of Raindrops being driven against the window by a strong Wind. Without a doubt, I thought, the morning would bring clear weather.

I snuggled in, leaving otherworldly dreams behind...to be dissected in the morning.