For the first time in this life, I looke 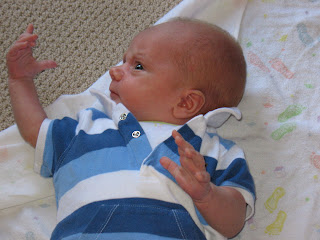 d after my baby grandson for a very short hour. I live in another town from my family, and I have not had the opportunity to do so any earlier. I was lucky enough that my care fell during his social time, right after a feeding. He was content; and so was I, in spades.

As his parents left, a little unsure of the whole idea, I think, as parents of newborns can be, I told little Graydon that we were going to use this time to get to know one another; he was not to instantly fall asleep, as is his wont.

Graydon and I discovered the piano. I pressed one key at a time and Grady's wriggly body went still, as he listened to the fading note. He had a look of intense concentration, holding my gaze, and then waving his fists once again, until another note sounded. I detected wonder in his eyes, as the vibrations of the notes filled his being...and then I played a series of four or five keys. I could feel his soul want to dance, as those notes tinkled...I could feel him want to laugh. I giggled for him, for his soul which wanted to move and play. I detected impatience in him, impatience at the limitations imposed by his baby body.

We wandered to the window. His eyes closed against the bright light and he squinted at Maple Tree, just unfurling his leaves. I opened the door, and he felt the breeze that whispered over his body...what secrets was Wind telling him, or was it only a welcoming kiss?

But it felt chilly to this grandmother, and so I tried to close the door, but Graydon's little body tensed...warning signals from a one-month old baby...so I let the lullaby from Wind caress his soul a little longer. Again, the look of intense concentration, and the look of pleasure.

The baby is more or less on a schedule; at this first time in caring for him alone, I didn't want to change anything! I was told he would be awake for perhaps 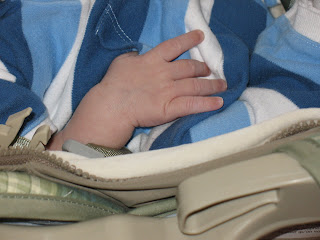 half an hour, so I made every minute count as we told each other stories, of the past and of the dreams of the yet-to-be.

We burped, he and I, as I tried to teach him how...I am not a good, satisfactory burper. So I understood Graydon's dilemma in not knowing how to do this thing that is so essential for all babies, if the parents are ever going to get any rest. We tried different positions, I showed him on his body where the burp should come from. He succeeded a couple of times, and we celebrated each hard fought for burp.

And then there was the unforgettable chuckle, with the widest, crooked grin...a gas smile and hiccup in one, probably, but I believe he gave me a giggle...one of those soft, tug-at-the heartstrings baby chortles. It didn't just tug at my heart...that soft, sighing sound of a happy baby melted it.

I sensed him fighting sleep; it was time. I recognize the fight to stay awake and aware; it is my legacy to all my children. And so, I'm an expert at this one. I bundled him in a soft, blue, fleecy blanket, held him close to my chest, and sang some of the soft, silly songs of childhood. He became still, his eyes unblinking. They would droop, he would sigh...and then, open his eyes wide, trying so hard.... But his body's need for sleep overrode his desire to stay awake.

I had decided to find his mother' 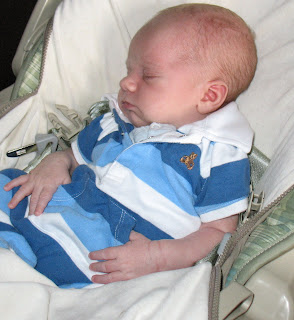 s chair, the one where she feeds him, when it was apparent he was ready for sleep. The smell of his mother, the familiar surroundings, and the ultra comfortable chair we were sitting in that almost lulled me to sleep did the trick...he was soon sleeping soundly.

And there we sat, he and I, me drinking in his face and the feel of his warm body next to mine, and Graydon sleeping deeply. We were there when his parents came home.

Our solitary interlude, our first intense bonding, on the day of his first month on Earth...yesterday was a gift every grandparent shares the very first time caring for their new grandbaby.

It may differ in culture; it may differ in language, but the end result is the same...a strong link, a chain of love, is formed when we open our hearts wide to the unblinking gaze of a newborn grandchild, in solitary communion.
Posted by Marion at 3:04 a.m.