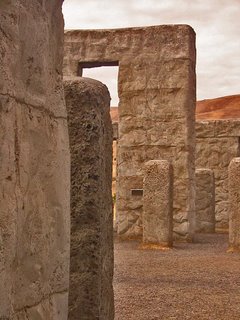 onehenge? Situated in Mary's Hill, Washington, it is a quiet, windswept place, overlooking the Columbia River.

Sam Hill, a railroad tycoon, had visited Stonehenge on the Salisbury Plain in England with Lord Kitchener, in 1915. Lord Kitchener, a Secretary of State for War supposedly told Sam Hill, a Quaker, that the ancients of 4,000 years ago offered bloody sacrifices to the Gods of War.

This is no longer what the belief about England's Stonehenge is, but at the time Sam Hill, a pacifist, felt that modern warfare was a form of needless human sacrifice. He told his biographer, John Tuhy, that he built the Maryhill Stonehenge "to remind my fellow man of (that) incredible folly."

The Altar Stone was dedicated in 1918. The replica became a war memorial in progress. It was the first of its kind in the Northwest, and perhaps in all of the US at the time, with six names inscribed at the time of the dedication. More would be added, until there were 13 fallen war dead from Klickitat County whose memory lingers on at this memorial. 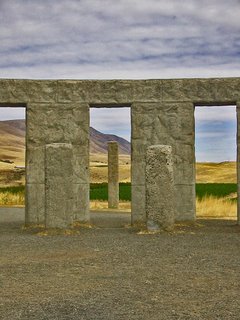 The completed monument was dedicated on May 30, 1929. Local stone was considered of poor quality, so 1,650 tons of concrete were used for the constructions of the pillars. In order to provide a surface closer to the original in England, the wooden concrete molds were lined with tin, giving the appearance of weathered rock.

The sadness that stays within the circle is palpable; on a hot day, in a sweater, I felt chilled, I almost wept, for these souls memorialized here. Their remains are scattered throughout the world...yet they linger here.

We were showered with a golden light throughout our visit there. I held my tears, pinching my nose...overwhelmed with melancholy. This was the hidden log in Shaman Maggie's forest, and I asked my guides's aid.

I walked around, touching each plaque, hearing and learning about these young men from Klickitat County, who gave their lives for their country, in what was supposed to be "the war to end all wars"...and I felt the maelstrom of energy that surrounded me calm, become more peaceful. 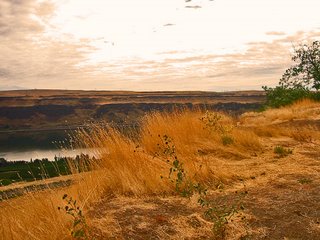 This is really all they want, the Dead, a deep soul connection and recognition of their time on Earth.

We left the Stonehenge Memorial, pondering the lives of those boys who died...feeling their presence with us still.

We had decided to spend the night at Yakima...I was amazed at the growth of that city since the last time I spent time 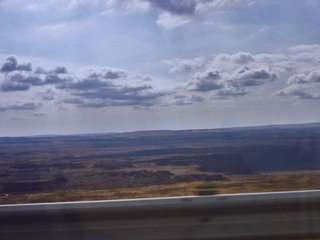 there. We stopped at the Tourist Bureau, and were welcomed with a beautiful apple and a donut peach, and had accommodations found for us.

It was just what we needed...a respite from the road beside a meandering river, with a wonderful walkway along it.

We planned the rest of our trip, visits to Leavenworth, a stay at Wenatchee, another stay at Spokane or its environs and finally, back to Canada, our destination Queen's Bay on the Kootenay Lake.
Posted by Marion at 11:18 a.m.