A foretaste of the Storm w 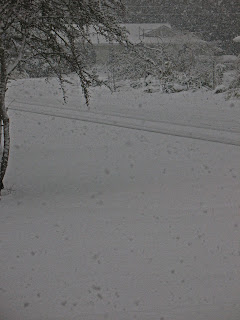 as to hit Wednesday afternoon with viciously cold, bitingly strong Northeasterly Wind and freezing temperatures. Snow crippled the roads for a time, then the weather cleared, with a breathless hush, as if lying in wait...

Then the Blizzard hit, swirling down from the North, following Wind and blowing icy Breath over the entire landscape. Dark and menacing, this was no Winter Wonderland...

Heavy and wet at times, and with crystal clarity at others, the Snow Flakes obscured the camera lens with regularity. Menacing blasts of Wind, sending clear icy drops into my face also hampered the photo opportunity.

I mused on the ph 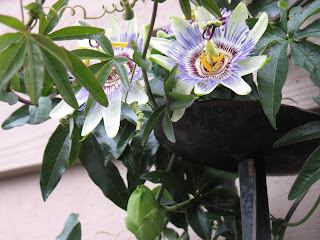 otos I took last week, of Rose and Passion Flower, even after two or three Wind and Snow storms still holding their Blooms up to the Heavens...shouting their defiance at Winter's coming cold.

It snowed for the next three days. At times, the Snow Flakes slowed their hurried descent, becoming like graceful, plump pillows of down floating their way down to join their fellows.

At other times, the Snow Flakes joined into one billowing mass...sending furious, stinging energy clear into my consciousness, bringing clarity...

Sounds were muted...only the howling and whistling of Wind and the swish of the snow ploughs broke the silence. Winter was awesome 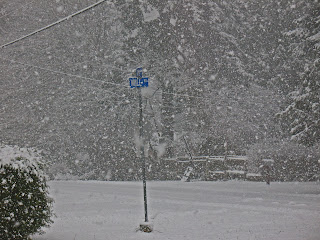 in his wake up call to the dark, silent Nights to come.

And then...another weather alert. This time for massive flooding to begin, right after the Snow Storm ended. Record rainfalls and melting snow warnings were posted, and there continues to be a River Watch in effect.

It was awe-inspiring, to watch the swirls...the complete circles of weather change. My body did not adjust, for a time. Sinuses were bothering me, arthritis acted up and then disappeared...the weather barometer moved from clear and dry to heavy rainfall and warm, moist weather the next. It was a roller-coaster ride.

Within hours, we moved from frigid Arctic temperatur 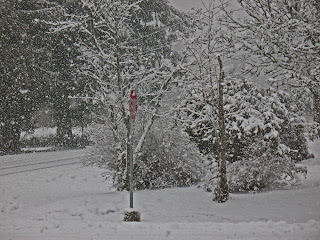 es to warm, breezy Southern ones...the ones that remind me of early Spring. The Snow melted, right before my eyes.

For a time, we had Lake front property, as the back garden area flooded with melting Ice Water, with the run off ditch plugged. The dogs moved delicately through the Lake, trying to sniff out their familiar grounds.

Thoughts ran through my mind about the gentleman in the Homburg. This stranger who was not a stranger is a showman, I think. His warnings and his introduction came before a huge Storm, which ran the gamut from cold to moderately warm...all in the space of a few days.

The backyard Lake was due, in part, to the run off from the Park. 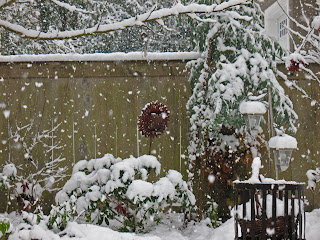 His arrival signals another life change, another big event arriving soon. I will look out for him during the coming months.

And there are other signs of change...a Snowy Owl flew low over Grandfather Tree the other day; five Eagles soared and flew low over the House, inciting Lucky to a grand hysteria; my dreams have a particular urgency and flavour.

What other surprises await for me with this wild advent to December storms?
Posted by Marion at 9:43 a.m.