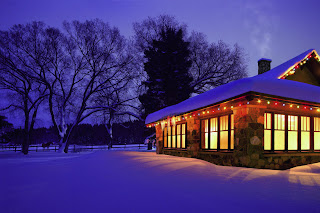 Years and years ago, when I was a child, Santa Claus came on the day of Christmas Eve. By seven or eight o'clock that night, gifts had been wrapped and placed under the Tree...which was behind closed doors.

Always, I heard the jingle of Reindeer's collars on the roof. Always, in my youngest years, there would be a sister who would tell my youngest sister and I stories, to keep us occupied.

Santa disappeared, I was told, if children caught a glimpse of him, when he delivered presents. Along with all the gifts.

After a meal, we were allowed to view the Tree in its splendorous, bedecked glory, with gifts underneath piled high. As our family grew, the gifts did, as well. At my youngest age of memory, it was overwhelming...I remember well how difficult it was to just stand in one place.

But we were expected to sing Christmas Carols. Before opening gifts. This was one of my mother's favourite traditions...the singing of Carols on Christmas Eve. 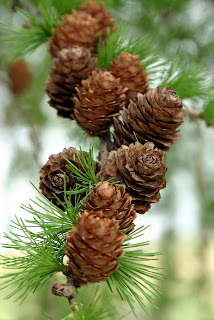 As I sang, I calmed down a little, I felt myself lost in the beauty of the old German Carols we sung. I especially remember hearing bells in the heartstoppingly beautiful renditions of the music playing on the record player behind us. Those songs that were played will forever remind me of my mother.

And then, as the spell of the Christmas music consumed me, it was time for gifts. My mother would hand them out, and we were expected to wait until she regained her seat, and able to watch us open them.

I was never quite sure how to react when I opened a gift, and so I resorted to enthusiasm and smiles, regardless of what I privately thought of the gift. And thankfully, attention was never centred on me for long, as there were many family members at home on Christmas Eve. The celebrations lasted long into the Night; Christmas Morning was for sleeping in.

When I became a teenager, Christmas Eve and the gifts I received did not seem as important or as thrilling as when I was a youngster. Could I 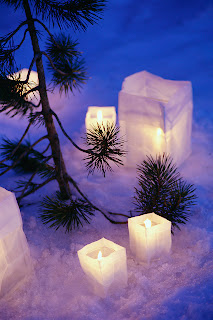 play with a Sweater or a Skirt? I still wanted new toys, toys that could be played with and assembled and imagined with. I wanted books and art supplies, along with the Sweater. For years, it seems to me, I could not quite clear that hump to adulthood...Christmas was a time for the complete child in me.

One who still wanted to play.

And then, the day after my twentieth birthday, my child was born. And Christmas was forever given over to my children, after that day. The child in me delighted in my children's awestruck demeanour, at Santa Claus, at hiking for a Christmas Tree, at the music that filled the Air. At the toys and books and craft items I could make sure they received. The ones that I really wanted to play with.

My favourite gift is still something I can play with over the Christmas Holidays. A book is always a welcome gift, but for the day after, when adrenaline still runs high, I need to work energy off. I think the Cuisinart I received years ago was a great gift. More vegetables were chopped, pizza dou 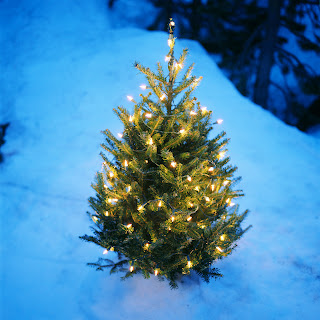 gh created, cheese grated over the holidays following receipt of this gift than any other time.

Gourmet foods fairly flew out of the kitchen, with my children and their friends being easy targets that year.

When I married, Christmas traditions I had grown up with, where we opened gifts on Christmas Eve, changed to celebrating on Christmas Day, with gifts opened in the morning.
And in so doing, I lost the wonderment of lighting the Night on Christmas Eve, for a time. I lost some of the awe I felt as we sang those songs...Kling, Glockchen, Klingalingaling...I can hear the words now.

But that is the thing about memories...they are always there, when I want to grab them for a look. And as an adult who knows her own mind, I can play these wonderful old songs, and remember the awe and wonder I felt, so long ago, when I sang them.

In memory of both my parents who have passed on, my mother just recently, I have decided I will find a CD with songs similar to the ones that were sung on Christmas Eve during my childhood. Those were the best Christmases, the ones where childlike innocence still reigned. They were the early years in my life; before bad memories superseded and Christmas became, during some years, a trudging climb to get over.

As I read Sheila's post recently, wherein she spoke of fav 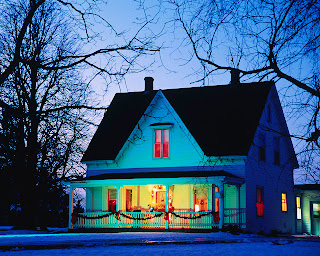 ourite Christmas melodies, the memory of my mother's tradition, where her children sung her favourite songs, with voices clear as bells, on Christmas Eve, came clearly to mind.

With it, came the memory of how wonderfully excited I felt, how the anticipation seemed so much better than the real thing.

Once a year, those memories take me back to an innocent time in my life, where the world's experiences lay ahead of me, and there was nothing to fear, nothing to regret.

And there is no greater gift than that.
Posted by Marion at 2:00 p.m.