We had a mixture of the some of the members of our family and friends for a celebration of Scott's and Graham's birthday this past weekend. I may not be related by blood to all of these people, but I know one thing...our group of souls have been together long before this lifetime.

There was that sense of easy familiarity between one another. Different backgrounds, different experiences in life...it didn't matter. I located the party under Grandfather Tree, knowing the medicine wheel and Tree's wisdom would calm and centre each person who came. Grandfather Tree pulled us all together, as we sat and talked and laughed, sharing stories about each other. 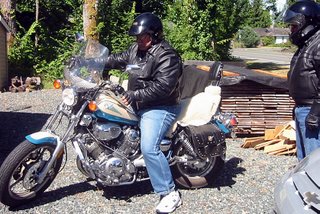 Earlier in the day, Jerr had taken Graham for a motorcycle ride along the coast road...a twisty scenic drive. On his 55th birthday, for the first time, Gray became a passenger on a motorcycle. He has his own bike and is always the driver! This day, he handed over the controls to Jerr, with a little trepidation, which was soon dispelled by the energy and the thrill of the ride.

It gave me time to think and plan, do the small things involving this party... without interruption. The alone time centred and grounded me; it gave me time to commune with my guides and ask for their help. I asked that my body would hold up throughout and I told them my intent for peace and joy during this event.

The garden contributed to the sense of peace and well-being later, when the arrivals began. I listened to the laughter and gaiety as I put the last minute touches to the dinner. There were two roasts...one beef and one pork...on the BBQ rotisserie. Prawns were grilled at the last minute, after a bath in a marinade of lemon, garlic, salt and olive oil.

No matter how much I plan to have everything ready before people come, there is always something that has to be done at the last minute. The prawns were one. The barbecue needed to be switched back to grilling mode. The roasts had to be taken off for that to happen. Then the prawns were placed on a special grill...it seemed never-ending! But Heidi and Leanne pitched in, working well together, mixing the salads and placing them on the special outdoor table Graham had built to hold the food and drink and all the paraphernalia one needs to have a picnic outdoors.

It was a beautiful day, not too hot...but the shade from Grandfather Tree would have made the hottest day bearable. The dogs were put into the garage at first; then the general consensus became they should not have to stay in there for the duration of the party. And so, against my better judgement, I let them out.

My heart in mouth, I watched as they raced out of the garage with boundless enthusiasm to greet all these people who were calmly enjoying the afternoon ambiance of a garden party. Quickly, drinks and food plates were lifted out of the way of enquiring dog noses, but there were one or two swipes of the tongue on a wayward plate. Nate threw his ball onto everybody's lap, hoping for a game, and Lucky insisted on greeting each person by placing his paw on each knee. Bree and Jane jumped on the trampoline, with Lucky barking his trademark Whooowoowoo bark with each jump.

The dogs never really settled down; I had to put them back into the garage while we ate. Bree and Jane, Bree's friend, took them for a walk after dinner. But Rabbit chose that moment to dash across the road and we almost lost Bree and Jane, who were dragged a few yards by these leashed hounds who wanted to get that Rabbit! It was Lucky's birthday, too...he was born on July 16, Gray's birthday. He thought he deserved a rabbit or two...and raised holy, howling hell when he actually saw one.

Eventually I just accepted that I was the only person bothered by their unruly behavior. When I did that, it seemed to me that the dogs became somewhat more mannerly.

Acceptance of circumstances I can't do anything about always works. It just takes me awhile...I need that time of beating my head against a brick wall for a bit, it seems, before I give up and ask for help from the Powers That Be. My guides were already helping me; they just stepped up the pace. When I gave Jane a little Reiki for an ache she had...it was instant relief. The vibrations were so intense here, on Sunday.

There were so many last minute decisions! All the planning...and still there were things I 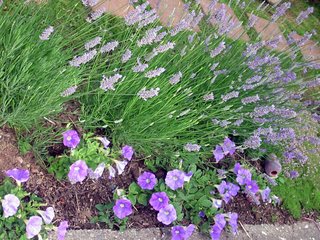 missed. The pasta salad almost never made it to the table...I had forgotten it. The beef roast was still too rare. As I searched for the candles I wanted to place on the pies, a question arose which required my presence, and the candles were never placed on them. The homemade ice cream Gray and I made was still too hard by the time dessert was insisted upon, by a few members of the party. So it seemed as if we were chiseling the ice cream out of its container. I forgot to put out the special brand of chocolate milk Bree, Scott and Leanne like. But I knew it didn't matter...those details were insignificant. They would not be remembered after the festivities were over.

We sang Happy Birthday with gusto if not with talent, to Scott and Graham, in whose honour this celebration was.

Reiki was discussed, later in the evening. And freely given, underneath Grandfather Tree and the Medicine Wheel, where all these different souls had come together, as at a homecoming, sharing dinner and the good energy created by this simple act. 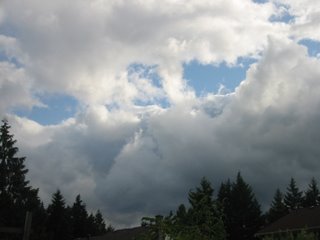 My body held together...in fact, I felt little pain throughout the evening. It was not a quiet day for me; far from it. I felt as if I was racing from early morning till late evening. But it was fun. And very heartwarming to watch all these people, whose lives may intertwine in the future, enjoy the garden, the conversation and the food.

A birthday celebration to be proud of.
Posted by Marion at 11:18 a.m.