On the road to selling a home, one must be absent for periods of time when a Realtor shows people through. 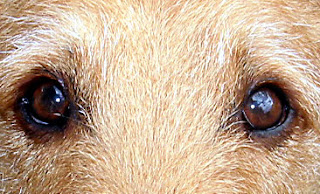 And not only was I to absent myself, I was expected to take Lucky and Nate with me.

This presented a problem. Our two Dogs, Lucky and Nate, were far too strong for me, when leashed. Both pulled in opposite directions, both competed against the other, as to who went first...and should a Cat or a Deer wander into view...well, chaos, a mild word in this case, reigned.

Realtors know everything, at least ours seems to. She directed me to our local pet shop, where she told me she had bought prong collars for her two dogs, both strong Labs.

Sceptically, at first by the looks of those collars, and also, beset by doubt that anything would work on our headstrong Dogs, we bought them, taking them home to immediately try them out.

We endured the usual ruckus created by the sight of the leash, waiting for each to settle down, before attempting to collar them. I managed to close them, but only just...the collars are definitely not made for arthritic fingers.

We tried this out while Graham was still here to help the first time. I expected the usual arm-out-of-the-socket routine, as I'm dragged out of the garden gate...

Lucky and Nate took to these collars as if they had always had them. Walking with alertness, but with entire docility, by my side, there were a few whimpers and growls when Cat walked stiffly across their path. But there was little pulling, even with this extreme provocation.

A friend commented were he to put one of those collars around Graham's neck, Graham would walk quietly, as well.

As funny as the vision was, he had a point. I placed one around my neck, and found it to be not uncomfortable, even when I pulled it tight. It gave a definite warning, however, as to who was the leader of the pack. 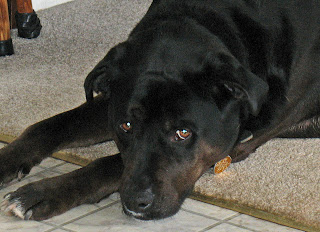 There are rules to be followed, in the use of prong collars. And I find a slight correction with my hand holding the leash is all I need, in the training of Lucky and Nate. I would definitely not yank back on the leash; this would be too much strength, and I'm sure would hurt them.

On the other hand, they are not attempting to lunge forward, now, with the prong collars on. It seems both Dogs settle down as soon as they see the collars, becoming completely calm. And willing to sit quietly, while I wrestle with the stainless steel collars, when a Walk is imminent, as it was yesterday.

With Graham now moved to Williams Lake, it falls to me to take them on that Walk.

They waited, eagerly, by the garden gate, each sitting down. Quietly. Previously, after leashes had been placed on them, there would be circular races run around me, and much howling and whining. It would be difficult to put gloves and coat on, in preparation of the Walk, with these two.

I was left to myself. I glanced at Lucky and Nate, perplexed and astounded. Who had trained these two overnight?

I picked up the leashes, steeling myself. The gate has a latch, which when exposed to freezing temperatures, is difficult to open. I struggled with it, this t 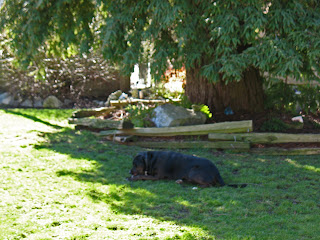 ime made even harder with the two leashes in my hands.

I felt as if I were a Duchess, as the three of us walked out of the gate, with no struggling and extreme tension. Before the Collar Event, these two would have already exhausted me, even before we moved up the front steps...

And now, Lucky and Nate moved as if they had been Supremely trained.

As we wandered through the streets, avoiding places where other Dogs and their Owners congregate, both of them moved calmly by my side, enjoying the Walk.

It was very cold; few people were about. The day started with Sun blazing down from cloudless Sky but now...there were huge, dark Clouds obscuring Sun's face. And stinging nettles of icy Rain pelted us, as we continued to stroll, up this street and down the next.

I noticed some gardens were beginning to flourish; most were still sleeping, especially with the vicious Cold and Wind which was now occurring. I couldn't imagine many gardeners wanting to brave frozen soil such as we have right now...and then I remembered to where I was moving...

And I realized here on the Coast, were it not for the frozen soil, I would be turning and mulching, doing the beginning of the Year work in the garden. But up in the Cariboo, an easy foot of Snow still blanketed the area.

And an Arctic Cold Front has swept down over the interior of BC, giving Williams Lake a temperature of -23 C, with the Wind chill. I had better get accustomed to cold temperatures.

As we walked, I mulled over this, becoming lost in thoughts of planting Lilac and other Trees and Shrubs which do well in the North. I recognized the itchy fingers of a Gardener in the very early signs of a new Season.

The Dogs jerked me to awareness of the present, when a fancy, white Lady Poodle strutted down another street, into Lucky and Nate's view. I am here to tell you these Collars do nothing to stop the vocal cords in a Dog. 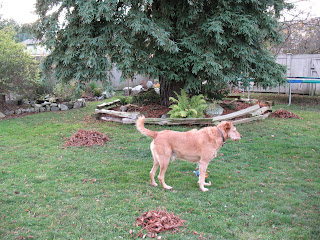 a huge ruckus, with their woo-wooing and urgent calls to the Lady, who ignored them completely, as the impeccably groomed true Lady she was.

But they did not pull.

I turned them and walked the other way, chuckling to myself. The Duchess had fallen, in full view of the inhabitants of this street.

And so it goes, when a home is for sale. Walks, walks and more walks, each begun with the hope that these people will buy.

It is a process, as slow as it seems. All things in their time...

Nate, Lucky and I will just have to walk off our impatience...and be grateful for the fact we can.
Posted by Marion at 7:51 a.m.