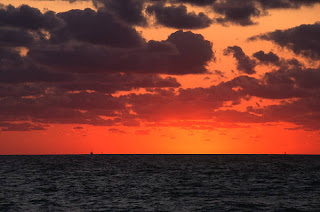 I found myself with a few days all to myself, this past week. I had plans to keep myself busy; it turned out, however, those good intentions mostly fell by the wayside.

I'm one of those people...you know who I mean...where the road to perdition is paved with good intentions. The ones who make lists, in anticipation of chunks of time in which to do them. And when the time arrives...it seems as if other items suddenly become important.

I kept my medical appointments and massage therapy appointment. Two of these involve driving distances to keep. Because the weather turned towards bitter cold, I was a little apprehensive of black ice on the roads...an apprehension borne out by the many fender benders left littered behind on the highways.

I couldn't seem to settle on the rest of the list. Wandering from pillar to post, I couldn't grasp the strength of determination to tackle the rest of it. Things like cleaning out closets and cupboards, wherein I can find nothing at the moment...did not hold my attention.

And you wouldn't want to know what my office looks like...dusty papers stacked in piles which had some significance at some point, and very little now. Each time I begin to tidy...I notice an object that takes me off to the past entirely.

This time that object turned out to be Grampa's magnifying glass. I noticed how dusty it was, cleaned it...and then spent the next hour looking at items through the lens, towards a different reality. Objects are much more complex than they appear to be, way up close.

Back I went to the office, after following the wee detour to the side, my back straight...determined energy propelling me back to the dusty papers.

But oh! I just had a thought...and I write instead. A few hours go by this way.

The other morning, taking the refuse container to 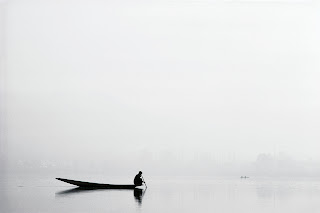 the curb for pickup by the Town crew and placing the items for the Canadian Diabetes Association on the other side of the house, making sure I didn't mix-up the two bags...I couldn't help notice the heavy frost that blanketed the yard.

It was very early; Sun had not yet arisen. It was that time of the morning where the edge of daylight is still only a hint in the East. But Moon still shone, almost full, giving the garden figures a ghostly sparkle. It was cold!

And it was time for a walk. I bundled up, considered taking the dogs, and pushed down the guilt I felt...I didn't know for sure whether I could handle both of them, especially with every dog walker in Qualicum Beach out at the same time.

I walked, this time, towards the Forest, instead of towards Ocean, my usual walk. I wanted to see the rays of Sun pouring through the tall canopy of Trees, when he arose. I wanted to see the Mist that blanketed the soccer playing pitch catch those rays and disperse in ghostly little clumps.

But most of all, I wanted to talk with the Trees...I needed to hear their collective wisdom, as a group. These age-old Trees give a comfort to me I have found nowhere else. Forests, with their silent ability to hold boundless life, have experienced Spirit.

It is still. The hush of the distant highway filters down to me through the cold, silent, coming Dawn. It is with a sense 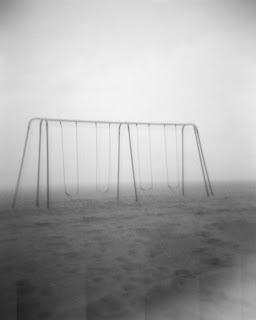 of coming home that I find the path into the Forest, into the comforting energy of the mighty Trees that surround me.

My steps are silent; the path is covered in bark mulch and cast-off needles. I walk briskly; for me, these new shoes work well. Especially when it is this cold, and my usual meander does not warm me.

I touch the trunks of Trees close to the path, I run my fingers over the Moss-covered nurse Logs that lie everywhere, giving life to all manner of beings. I notice the Snowberries are prolific this year, and take a few berries, placing them in my pocket for planting in the garden. They've always been a favourite; when I was a child we would pick them and pop them on a hard surface. The one with the loudest pop was the winner. It amused us for days, until there were few berries left on the bushes, only the small, hard ones.

I will plant these berries to make up for my innocent youth, when I actually destroyed them.

I find one of the benches empty, as I come to a fork in the path. This would be a good place to watch what the rays of Sun will illuminate, and so I sit. It is good to rest, I have walked farther than I have for many months at one time, and I want to hear the quiet of the Forest. I want to hear the awakening movements in the little glade I am in. I sit with my eyes closed, feeling and scanning the minute sounds around me by my hearing. 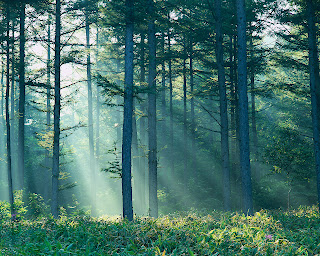 In the stillness, there is so much noise. The crunch of a Leaf, Bird song, the sound of wings beating the air, a Seagull's harsh cry, the repetitive voice of Eagle, the chittering of Squirrels. It's the large branches breaking that makes me open my eyes...it is just Dawn, after all, and wildlife is abundant here...but I see nothing. I try squinting, focusing on the light and dark, softening edges...using all the observation tools I know, but still only hearing the breaking branches, the sound receding in the distance.

While my eyes were closed, Sun broke the edge. The Forest was now bathed in the warmest crimson glow you can imagine....almost tinting some Trees bright red. I knew the Sunrise itself must be spectacular, yet I lingered inside the huddle of Trees. There was beauty here, as well.

The damp, mushroomy scent of a West Coast Rain Forest filled my nostrils. Steam rose from the Moss logs, as Sun nudged it with a long, vermilion fingertip, warming the surface and melting the Frost. Rustling in the underbrush became more prevalent; instead of sleepy chirps here and there, the Forest burst into a full greeting to Sun, in an instant leaving the stillness behind. 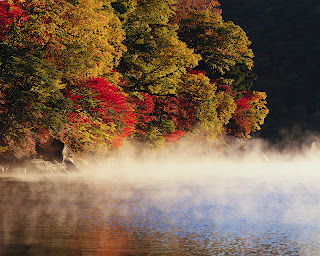 I watch the rays of Sun turning all things a golden red, every object reflecting Sun's wakeup call. People walking the path looked as if they had bathed in red-gold paint. The rays touched the bark of the Trees, illuminating the craggy runnels, highlighting the frost-covered old Spider Webs left from last Summer. The leashed Dogs' eyes shone golden, as they frolicked beside their owners, feeling the anticipation of a sunny day.

I am asked, over and over, if I have ever seen a more spectacular Sunrise. People's voices carry a gladness that is palpable over this gift from Mother Nature.

I feel my body's call to move my bones. The cold can stiffen me up for hours...exercise is the answer, and so I heed the call. I follow the circle on the pathway in the Forest, and come out near the Skateboarding Park, cold and forlorn at this early hour of the morning. Only the graffiti shouts loudly to the coming day.

But the soccer pitch still has low-lying Mist on it, tinged pink by the Sun's awesome arrival. As I walk, I watch the Mist disperse, clinging to the fence and goal posts, holding on in little pockets over the field.

I walk home, greeting Nate and Lucky at the door. They subject me to vigorous sniffing; there have been other Dogs around me, and they need to know who they were. 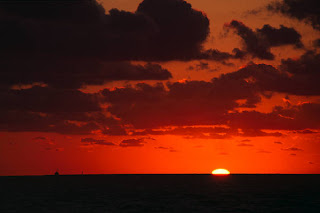 A cup of coffee in hand, I wander to the office, intending to clean...but instead, I allow myself to be distracted, and read the posts entered on Kilroy's blog carnival at Blog Village...finding myself entertained instead.

And then, I make a very large pot of Greens...Kale and Collards, mixed. It is enough to feed me for days, this mess of Greens. I'll eat it over rice or potatoes or pasta...it just gets better as time passes.

Perhaps it will give me the strength to tackle my office.