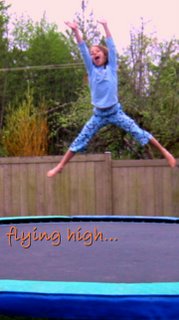 Before I studied with Shaman Maggie, I practiced awareness as much as a person with limited knowledge of what she might be looking for, could. I remember (here we go, down memory lane…it’s MY blog, heehee) taking my granddaughter when she was a baby down to what she had aptly named the Secret Forest. We owned three acres, and the back part of it was wild forest. I would point out tiny plants…wee stars and trilliums, violets and many mushrooms. I would show her the fronds of the ferns as they unfurled their leaves in the spring. We noticed many things on those walks. We practiced and the more we did that, more would show themselves to us.

Partly as a result of this practice Bree, my granddaughter, has honed her intuitive awareness. It gives her sureness, and a very positive outlook. In order to make her appreciate her homework (Huh!), I tell her knowledge is strength. She shrugs her shoulders, and then proceeds to tell me she just “knows” inside her tummy and heart. She is far and away more aware and has more faith in herself than I ever was. And she’s only ten.

But I have really digressed. I could write about Bree until the snow settles in summer, and probably will. Be warned.


As I study with Maggie, one sentence in a lesson on Allies, really resonated with me, and that is “As you progress through your studies your level of awareness will expand to include things you barely noticed before.” Other people ‘see’ their allies in dreams and meditations, but I only hear them. My auditory sense is turned way up in a meditation or a visualization; and in dreams, sounds are amplified for me.

Convinced that this would be another exercise in “hearing” my allies, rather than seeing, I spent a lot of time listening for words of wisdom from all sorts of beings, including the Sequoia in my yard. The Sequoia told me in no uncertain terms he was not only an ally of mine, though, he was much more than that to me at the present time, and he advised me not to look so hard. The Sequoia told me to relax a bit, and to have fun, while I was searching. He told me my allies were all around me.

“Huh!” said I. And then sat back, took a long drink of my water, and prepared myself for a relaxing, fun meditation. Never let it be said I don’t do what I’m told, I said to myself, especially when the advice came from the mammoth tree whose power resonates throughout our property. Both Gray and I have always been aware of his strength and influence on our lives since we moved here. Once again, I felt it was prudent to honour the tree, and listen carefully, and with intent.

Concentrating on my breathing, I checked my balance meter and my chakras, and felt myself slipping into dreaming. I was sitting directly in front of the tree, and became assimilated into the gnarly bark…and then there was no tree, or chair, or yard. I was tumbling through a spiral of colours…mostly greens and purples, which became deeper in tone, until I was surrounded by a deep purply blue. Plummeting further through the soft, sensuous night-sky void, I felt only awe and wonder…wanting the gentle twists and twirls I was undergoing to never end, inhaling the blue into my very soul.

I rolled into a smooth, unforgiving, very hard boulder. My fingers slid over its smooth, undulating surface, one that vibrated and sent out messages to my touch. The light was shining from behind the boulder, although I could not see the source. The back lighting gave the boulder a halo, and put the crevices in its hide into sharp relief. The boulder grew and grew in my vision. And then, in a deep, gravelly voice, it spoke with me, slowly and ponderously. And its words dripped with wisdom and age.

I felt the power of the rock melting into my solar plexus, bathing me in golden light. Rock’s words calmed me and filled me with resolve. Rock used hard language, albeit in a gentle manner…words that reverberated and vibrated within me. Words I had always known, but had forgotten.

Rock asked me questions. He did not expect immediate answers…he asked me to listen to the questions, and find my own answers. His queries were delivered in a slightly sarcastic manner, as if he knew this was a comfortable and humourous way for me to hear. Rock asked me why I was convinced my totems and allies were hiding from me. Why was I not seeing? What did I expect? Was I not aware of places and beings that made me feel secure and warm and good? Was I not aware of aid I was receiving on a daily basis, just by walking around my yard? Did I not read and research the internet on a daily basis, learning about allies and totems? What was it I did not understand?

Rock asked me to touch his face. Angular and chiseled, round and softly molded, sharp and wicked…all those descriptions flashed through my mind as my hand slipped through the cracks and crevices of the stone visage. Rivers and waterfalls coursed down his cheeks, making him appear sad, but the twinkle in his soul belied the façade he showed outwardly. My hand caressed his face, and waves of familiar energy coursed throughout my body, instilling instant peace. And knowledge.

I suddenly knew why so many rocks and boulders were delivered when we landscaped the back yard…a mistake made by the supplier, which we didn’t even have to pay for…which made me joke, for a time, about the quarry in the backyard. So many rocks that I easily placed, making raised beds around the perimeter of the back yard and the vegetable garden. It was the ease with which I “planted” the rocks that amazed Graham. He said he had never seen anyone work with rocks the way I did, so quickly and effortlessly. And it was, and still is, a real joy for me to heft and place a stone or a boulder, touching and communing with it. The boulders underneath Sequoia were picked out of a pile, and three of them became part of the Medicine Wheel constructed around the tree.

I was surrounded by allies. Rock knew the instant I made the connection, and a long rumble, which I assumed was laughter, issued forth from deep inside him….deep in the caves and fissures, right from his core. I chuckled with him…there is not much I enjoy more than a good laugh at myself, when I can get all bent out of shape about something, and then find how simple it all is.

Feeling the blue beginning to surround me again, I thanked Rock and watched him fade, swallowed up by the swirling colours of blue and purple and gold that took me back to my chair. Blinking, I woke staring at the ragged looking Sequoia bark, feeling the tree shiver with delight at my comprehension of my allies. It was a good joke on me!

I have dishes and pottery bowls filled with pebbles and rocks from various places around the West Coast of North America. I have, for a couple of years now, immersed myself in the study of rocks and crystals, use many crystals in healing…and have even placed two special rocks in the shower. People gift me with rocks…Scott, Graham’s son, brought me a beautiful, flat sandstone rock from the river. I saw the presence in Scott’s rock…a diaphanous, luminous being, a long slender reed of light…and I remember the warning given to me by Rock. He said that stones have been around a long time, and their stored energy may not be a match for mine, and to be discriminatory. I have since read the old Shamans sometimes stored their souls in stones, and the unknown author in that article advises leaving those stones alone. I cannot say for certain that all my rocks have pleasant personalities, as there are so many of them, but I handled each and every one, and felt no negativity…and the garden is thriving! To be sure, I will prepare a blessing for an early morning, when the world is asleep and I should be…

Wind, water and fire are all equally allies of mine. Wind, with its whisper soft messages or howling rages, gives me inspiration and clarity of thought. Water cleanses me, will take my troubles and wash them away, and soothes me in the form of misty rain that drips from my window. Fire comforts me, with its warmth and beauty. Fire takes my intentions to the Source, and its smoke cleanses and replaces negative energy, in myself and my place.

Even though my immediate world is filled with stones, I never associated them with my allies. This tells you where my head is at these days…something as obvious as Rock as an ally was passed over, even though I had read they could be strong allies. Stubborn and slow, they possess an unparalleled sense of humour, and I love and honour each and every one.

And when I tell Bree, she smiles a secretive little grin, and goes back to collecting the stones and pebbles she’s gathered since babyhood.