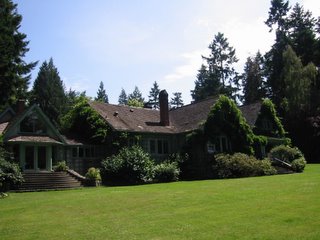 This isn't meant to be an esoteric blog; there are plenty of those. Shamanism and its principles can be very difficult to assimilate. These are my ideas on how to work those principles into my life...a life like any other.

I am no different from any middle-aged woman you see shopping at your local grocery store. I live in a small cottage situated on a crossroad, with two addled hounds, one black and one red, and my male partner, Gray. The reason I differentiate on the gender is I used to just call him my partner, until I was asked if I was gay. I'm not.

But after a series of crises and disasters that seemed to happen often in my life...I had the thought that I may be on the wrong path. And so, I investigated all the alternative beliefs, and believe me, there's a lot. But I was drawn to Shamanism, learned as much as I could stuff into my brain in a short period of time, and then decided to apprentice with a Shaman. I believe it was pre-ordained, but I like to think I chose it...and I hear my guides enjoying a good belly laugh! The joke's apparently on me.

Ahhh, you say to yourself. She's not like any woman in the grocery store...she talks with her guides! And I do. In this blog, I will share some of the conversations I have with them, and the teachings they give me. And how do you know the woman in the grocery store isn't having a good long conversation with her guides? It's not as if I go wandering around talking out loud (unless I'm in the garden, of course, and then only if the dogs are near).

I've had some wonderful visualizations, when the time was deemed correct for me to do so. For example, there was the time I tried to find my allies. I practiced and practiced, thought about it, dreamt about it, and even tried to force it, but no luck. I discovered I couldn't control this one...and then that led to a whole long lesson on patience and control...you get side-tracked a lot with Shamanism...one lesson spirals into many others. By the time I noticed I was entirely surrounded by Rock and Parsley, I had a whole lot of beliefs I was holding change. After that I found my retreat...a place where I go to meet my guides, where lessons are learned and journeys begun.

I'm new at Shamanistic story-telling, and I intend to practice writing some stories here. If you read this blog, and I hope you will, please keep an open mind and believe in the wonderful possibilities that are ours, just for the taking. Or, at the very least, acknowledge that I believe them, as do countless other middle aged and not so middle aged men and women, and that my life is a whole lot better as a result. Shamanism is just re-membering the old ways, after all. It's the assimilation of those old ways into my life that I want to write about.
Posted by Marion at 9:45 a.m.