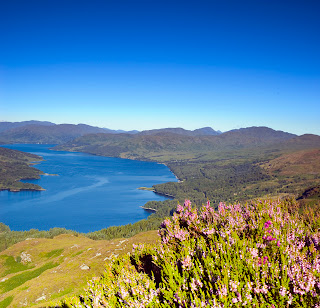 Many years ago, when I was in my teens, I visited a psychic who told me that I would marry an Irishman or a Scotsman. She actually mentioned something about Eire and bonny Scotland, where men were men.

I couldn't understand her well, her brogue was one of the first ones I had ever heard. But I felt happy inside; she obviously thought highly of her countrymen.

And I was young...men were always men, weren't they?

I struck out, on that prophecy, with my first two marriages. The two exes were of mixed parentage, with some English thrown in, along with a little Norwegian.

They obviously didn't work out, now being exes.

But I struck gold on my third try into co-habituating with another. And he was born in Scotland, only a few months after I was born in Hamburg, Germany. 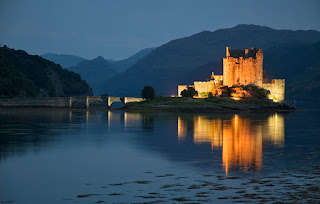 I immigrated with my family when I was five; my partner immigrated when he was twelve and a half. His memories of his birth country are much deeper than mine. He formed a link...a knowing...of his country; he remembers the nuances of Scotland.

Years ago, my first strong love was a boy of Irish heritage. He was an American, who visited me in the seaside village where I worked for the summer. He had a lilt to his voice that totally captivated me; he was dark-haired and blue-eyed. I no longer recall which County from whence his family came. I do remember he was fond of his grandparents in Ireland, whom he had visited often, over his growing up years.

I was young and Canadian. I did not understand how the draft worked, in another country. But S. was here, living on the beach, trying to decide if he should stay in Canada...and dodge the draft. 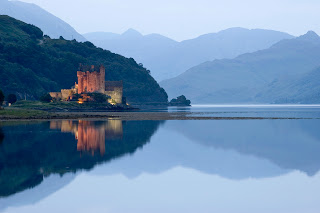 He went back to the States after the summer was over. It broke my heart, of course...here was the Irishman of the psychic's advice. Here, and then gone.

We struck up a correspondence, those being the days before email and easy long distance telephone conversations.

I received his letter telling me he had been drafted; I received one letter from him, after he went overseas to Vietnam.

And I talked with his mother, the first and only time, when she told me of his death.

I mourned...very, very deeply... for this unformed, untested love 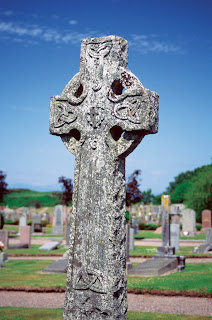 we had tried to nurture. I was so young; I did not, then, have the knowledge about grief I have now. It was not creative mourning I went through, way back when I was seventeen.

I believed, after this, that the Irishman the psychic had foretold had been and gone.

But I forgot, for awhile, that she had stated...An Irishman or a Scotsman will share your life.

Time passed. The Scotsman showed up after I turned 50...I waited more than half a century for the psychic's prediction to come true.

And yet, during the years I lived alone, I would have a recurring dream. One where I sat on a Mountain top, knowing I had just climbed a long way. Or sometimes, I would still be climbing, finally flinging myself onto the Moss covered Rocks, understanding I had done...something. Something important.

There was always a figure with me...a masculine figure, edging just beyond my sight...just there.

As I flung myself to the Mossy, Rocky ground, laughing in sheer delight, I would catch longer glimpses of a man...a man I knew very well, although I did not recognize him, in my daily life. This man was not tall, he was very sure of himself and the Mountain he stood upon. He stood, not speaking, just watching me, and looking at the view.

I remember seeing vast quantities of heather in bloom. From the Mountaintop, the various colourations 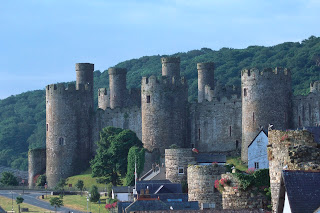 of purple blended into a giant patchwork quilt, one made by Creator's loving and artistic hand. There were Trees, close to where I sat, but I don't recall what kind...coniferous and deciduous mixed.

And in the far off horizon, I could see a touch of blue. I understood it was the Ocean.

I would wake laughing, feeling light of heart, during a bleak time in my life, where I had little hope. For awhile, although I didn't entirely understand the dream, it would give me some badly needed positive energy.

And then, out of the blue, Graham came into my life. Suddenly, my dream made perfect sense to me.

Graham is a Mountain Climber. He has climbed all over the world, although funnily enough, not in Scotland.

And when we met, it was as if we had known each other all our lives...we were so familiar to each other. He has the same energy signature of the Man on the Mountain Top. 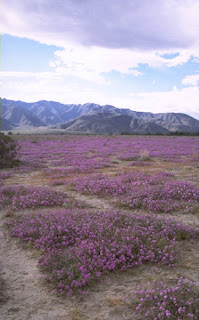 We think the same, mostly. We are either completely in tune...or have totally opposite reactions. It is as if he is the other half of me...together we are whole.

We intend to visit Scotland, in the future. I want to find the Mountain Top, although I rather doubt I could climb it, now. But I know it is there.

The psychic's prophecy came true, after many years of searching, of half believing her prediction might yet come to fruition.