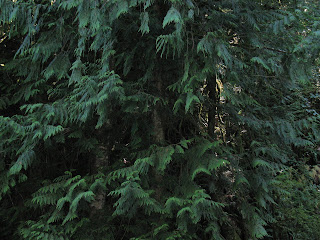 On our way to visit family in my hometown, we were held up at the entrance to Cathedral Grove by a head-on collision, just a few cars ahead of us.

My daughter told me my window of opportunity for seeing Graydon, my grandson, awake, began at about two-thirty pm.

As we left our home in Qualicum Beach, we discussed the possibility of an accident; the last three times we've visited, we have been held up by problems on the road.

It had been two weeks since I had visited with Graydon...at 4 months old, he was changing daily. But, we reasoned, what were the chances... we had met our quota of bad accidents requiring highway closure.

Not so, apparently. Cathedral Grove enthralls visitors. Driving through for the first time, people's attention wanders, as they stare at the huge Trees that have stood for centuries...and inevitably there are car crashes, on this narrow road.

We sat on the highway for an hour and a half, waiting for clearance to travel onward. While we sat, I took pictures, mused on the problem, watched people and listened to conversations tha 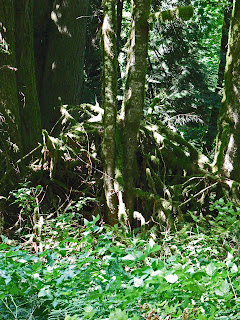 t took place as people wandered by, on their way to satisfy curiosity or find knowledge over the length of wait time.

It was interesting, after I swallowed my disappointment at not being able to see Graydon immediately. Mostly tourists wandered by... the locals staying in their vehicles with either a good book or indulging in a nap...

There were not many older folks trudging up the road; mostly youngsters and young adults ran and leaped past the car, their faces filled with the excitement of an adventure. We had just passed Cameron Lake, a large, deep lake, by which the highway ran alongside. In their minds, anything could lay just ahead.

One young woman discussed the possibility of Alligators inhabiting the low-lying area beside our car, after her friend wanted to find the way to the lake.

I waited for one of her friends to laugh and challenge the Alligator statement, but they believed her! On they went, discussing the safest way, wanting a pathway that was clearly defined, so that Bear and Alligator would not bother them.

As I wondered how a young woman could be educated a 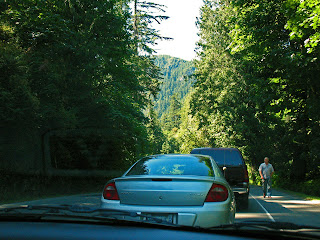 nd not learn that Alligators do not live in northern climes, a young family came along. The youngest son, about three years of age, asked his mother...Who lives in there, Mommy?

The little boy stared into the trees, his hand in his smiling mother's...and I heard his questions begin. Where, how, why...? His mother's voice dwindled as she embellished on her story, keeping her son occupied and listening all the while.

I almost believed everybody knew something I didn't...had Alligators moved into the swampy headlands of Cameron Lake?

As I watched, I identified tourists from Europe, Asia and the US. There were German tourists, speaking in their language, which I am still able to understand, having been born there. I noticed that the majority of the visitors were just a bit uncomfortable in what must seem like a deep, dark wild Forest to them...I lost count of how many commented on their nervousness at encountering wild life...I heard Cougar, Bear, Grizzly Bear, Mountain lion mentioned, with a wary glance around...oh, and Alligator.

I wondered what might happen to the people, all now leaving their cars, when traffic resumed. I fantasized about the cars being abandoned, about tourists being cornered by 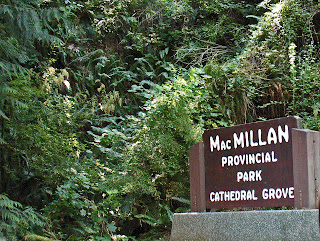 Grizzly Bears and Alligators, not able to return to their vehicles. I saw them become Tree People, with a civilization all their own, living in Trees and upended Roots.

I built a story around these beings, who, through pure happenstance, ended up living in Cathedral Grove...a shy, quiet group who kept to themselves, staring at visitors to the Park from between branches and high in Trees.

Would they befriend all those Kittens and Puppies that are dropped off in the Park to fend for themselves? Would they re-member the old ways? How? Would the tourists who were fearful of the Forest learn to befriend it? What would they take from the Old World, to apply to the New? Who would lead the group...would it be the authoritative woman who led her group of three other women? Or the young lad on the skateboard, who loved to show his prowess?

I fleshed out the story, lost in the Dream of the Forest People.

From a distance, I heard cars start...I woke to see the members of the Lost Tribe running back to their vehicles, children far ahead of their parents...running, running around the bend and out of my sight.

We continued on our way, over the small bridges, past the banged up vehicles attached to the tow trucks, past the parking lot of the Park, and past all the cars that were lined up in the opposite direction. 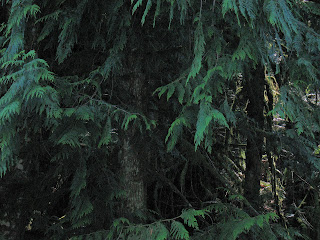 We were an hour or two away from the Window of Opportunity given me by my daughter. On the one hand, I had a lovely Dream...one given me by the Spirit of the Forest, one filled with excitement and adventure, one that gave my over-active Mind a sorely required rest.

And on the other...Graydon was still awake when I arrived...full of his incredible, blue-eyed charm and the beginning awareness of himself and others.

He stayed awake for quite awhile, considering he has two teeth and is working on the others. And then, he fell asleep in my arms.

The Universe allowed me to fulfill two Windows this day. Does it get any better than this?
Posted by Marion at 9:30 a.m.