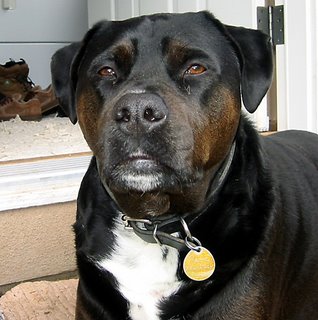 Graham and I are invited to Jerr's wedding with Melissa. Going to the wedding requires a trip to the Columbia River Gorge, where Jerr and Melissa live.

From Qualicum Beach, it will take Graham and I about two days by car to get there. So we decided to make a holiday out of it, and do some sightseeing on the return trip to Canada. We will go where Spirit takes us, ending up in Queen's Bay in BC.

Although Scott will be staying here, we all deemed it wiser to put both Lucky and Nate into their boarding kennel. They are used to it and the people, there will be the least disruption in their lives, and there are plenty of wild rabbits to bark at and other dogs to commune with.

Do I sound as if I am convincing myself they will have a good time?

At any rate, I tell them they are going for a holiday, too. We have also booked a bath and grooming for both dogs while they are there. At the moment, they are looking plenty scruffy, after the long, dry summer we've had. Lucky has Airedale feathers sprouting out all over and Nate, who is black, smells a little like socks that have been worn and not washed in weeks.

Because a stay in a kennel requires up to date vaccination shots, we scrambled on Friday to get a veterinarian appointment so that the very uncomfortable deed could be done. Our regular Vet was on holiday. So when we found a Vet who could fit the dogs in, we took our two shabby looking boys right down.

I knew as soon as we walked in that this Vet office was not used to dogs that frolic in mud and roll in as many juicy, smelly spots that they can find. It was a little like going to the Opera in gardening attire. There were pictures on the walls of impossibly shiny, well-groomed dogs...and the place smelled like an aromatherapy clinic.

Beware of Vet's offices that smell like that...as someone who is used to farms and the attendant scents that somehow always transfer to a Vet's office, I did not feel this atmosphere was entirely normal. And indeed, neither did our dogs. Nate, our thinker, especially recognised that he was out of his element here. Lucky, as usual, was far too excited to notice.

We filled out papers. The dogs were weighed. Then...oh, the shame of it, Nate told me...we were placed into an empty room as soon as they could get us there...because they had an appointment with a small, fluffy purebred dog that needed stitches taken out. The receptionist, whose nose couldn't have gotten any higher, informed us the Vet would be with us as soon as she attended to the other dog.

Gray and I looked at each other. Okay, we reasoned, they did not know us and they were kind enough to give us a last minute appointment. We told ourselves to keep an open mind. But Nate was not convinced...he became quieter and quieter, while Lucky checked out the fish tank, which had huge Koi swimming around in it. And then finally the Vet appeared.

It was apparent as soon as she walked in that she was frightened of our dogs. Not so much Lucky, who was dancing his fool's dance...any less threatening dog could not have been imagined. But Nate, who quietly sat in the corner by Graham's chair, must have twigged some fear in the Vet. And so, as a result of her fear, she went on the attack.

Her first question...Do these dogs have fleas?...made Graham's back straighten and his Scottish chin jut out. On the other hand, it was a dry summer, one where fleas can be prolific...but Graham did not know that fact. I hastened to say, no, they did not have fleas, they were going to be groomed at the kennel, they did not always look so scruffy. She did not look convinced as she checked Lucky's coat...so far, she hadn't gone near Nate. She looked surprised when there was no indication of the dreaded fleas.

What she didn't know was that these dogs are fed garlic, and I rub their coats with herbs...pennywort, rosemary and thyme. They receive Reiki every day. I rarely have problems with fleas in any of my animals. 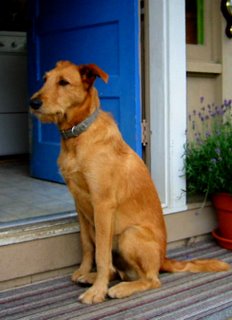 Then she checked Lucky's ears. I was convinced Lucky had a problem with one of his ears...he barks a lot...and when he barks, he shakes his head at the loud sounds he emits. He has never realized that if he didn't bark and howl as long and loudly as he does, his ears wouldn't bother him. Lucky allowed her to look into his ears. But the only thing apparent was a lot of ear wax in one ear and the Vet lost interest in looking any further. Then she wanted to check his heart.

I thought Lucky would climb into the fish tank, when she tried to listen to his heart with that shiny object. He was not going to stand still for that at all. As excited as he already was, there was no containing him now, and I wondered how she would be able to squirt the Bordetella vaccine up his nose.

Most of the vaccine ended up on Gray's arm. But she felt Lucky had received enough of a dose.

Graham and I had exchanged dogs, when Lucky became fairly unmanageable, because Lucky will listen to Graham. He will listen to me, too, but I have to use a growly voice...and I didn't feel comfortable enough to use That Voice, in this office. So I was sitting with Nate, who was laying quietly, watching everything, by my side. And I felt his reticence...he does not like it when Lucky gets frightened...he will try to help him, every time. Lucky is his mate and he looks out for him.

Nate was next. Gingerly, the Vet came towards him. I heard Nate give a soft growl, one that told me he did not like this woman. Once again, Gray and I exchanged dogs, but not before Nate licked my hand and looked into my eyes, telling me he was only voicing his opinion and didn't mean anything by it. But the Vet became more frightened, sending out the scent of fear. Nate let her squirt the vaccine up his nose without any problems, almost as if he was apologizing for his small outburst.

She didn't bother with checking his heart or his ears. She complained about his weight. Nate is a labrador cross. He has bull terrier in him; he has a large, muscular body and short legs. When she touched him, she was surprised at the muscles that are hard and solid on Nate's body. But she couldn't let the weight idea go...even as she said his muscles were very well developed. And then... oh, horrors!...she swiped at his shoulders and said there was plenty of fat there, too.

Dear me. It got my dander up. For the last four years, we have tried every dog food under the sun, spending huge sums of money to find some food that Nate could eat and still lose weight. We had finally accepted that Nate eats everything and anything...telling ourselves that as long as he received plenty of exercise,with food given at the barest minimum, we would live with a dog that had a physique like a beer barrel. He is our Nate...just the way he is.

As I explained this to her, very firmly, she became angrier. It was the end of the day; perhaps it had been a bad day for her. She would not stop accusing us of overfeeding him...it seemed as if she couldn't. As she went on and on about the kinds of different dog foods out there (as if I didn't know...I had just told her!) she fed him treats. It was bizarre.

She left us, as soon as I pointed out to her what she was doing.

After I paid an astronomical bill, we took our scruffy dogs back home, reassuring them we loved them, even if they weren't perfect. We threw the ball for Nate, who, even with his barrel body, still jumps high in the air to catch it, over and over. We listened to Lucky bark, shaking his head at the same time. We fed them, watching Nate wolf his food, and Lucky turn his nose up at it.

We tried not to feel guilty, as if we were mistreating them. I don't usually feel this way, but a Vet that doesn't know us or our dogs had the ability, this day, to make me question myself and my knowledge of dog 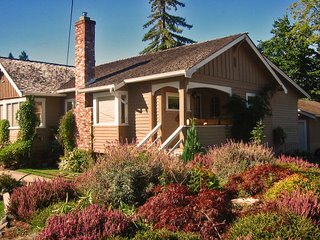 In the end, the dogs got their up-to-date vaccin- ations, they are off the kennels this week, and Graham and I will spend some time with friends who are tieing the knot on the side of the Columbia River. The guilt of being a bad dog owner is gone, with acceptance back in its place.

And next year, when it is vaccination time for the dogs again, I will be a little more organized and take the dogs to our familiar vet, one who knows us and our dogs.

One who accepts us just the way we are, even on bad hair days.
Posted by Marion at 7:38 a.m.